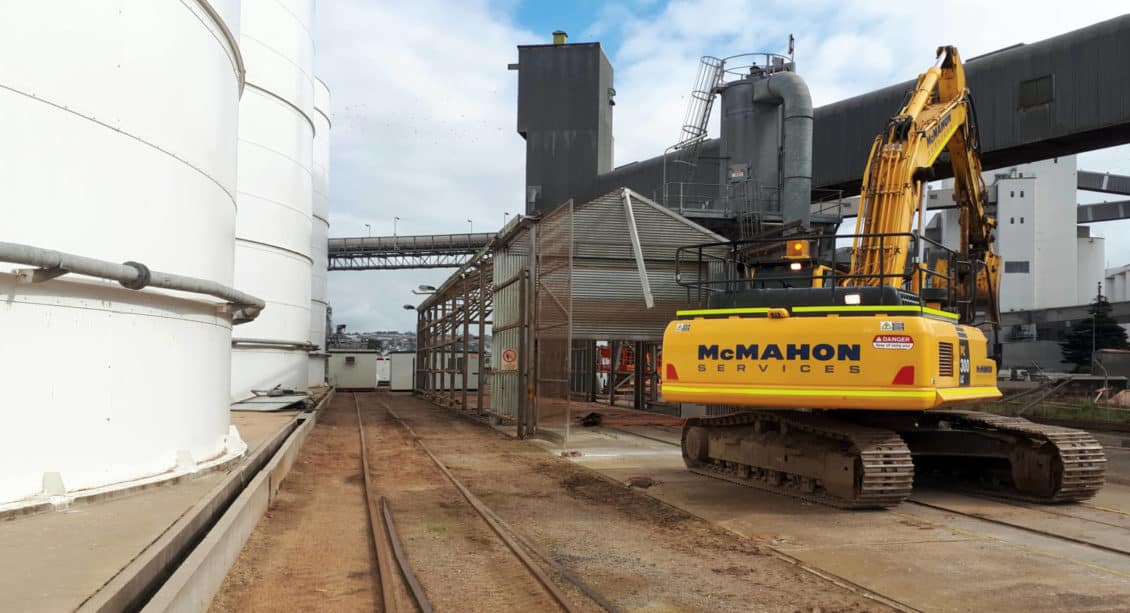 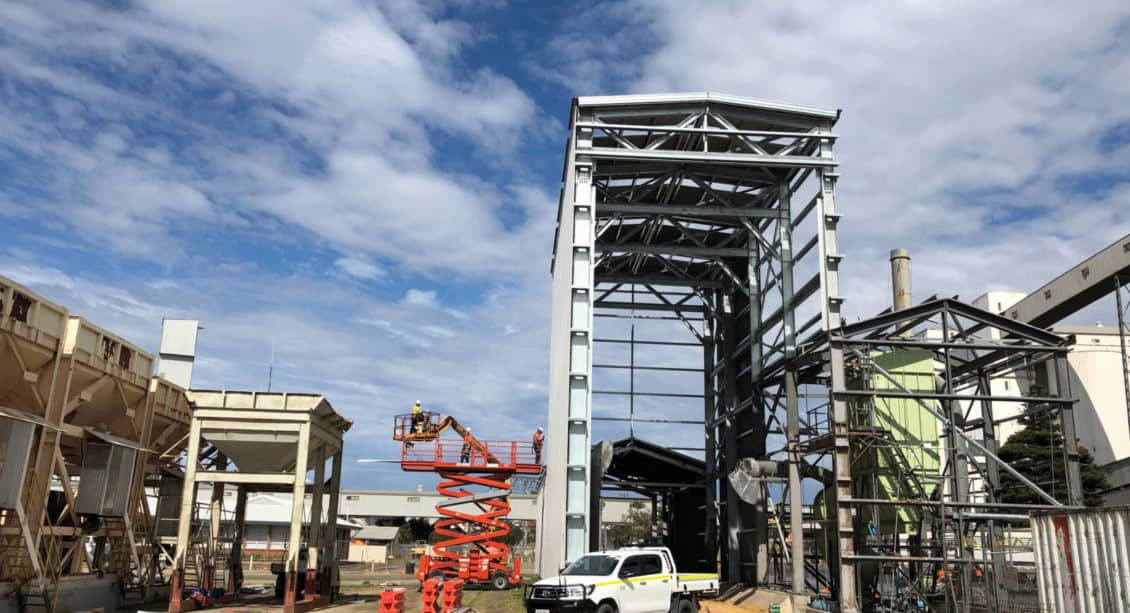 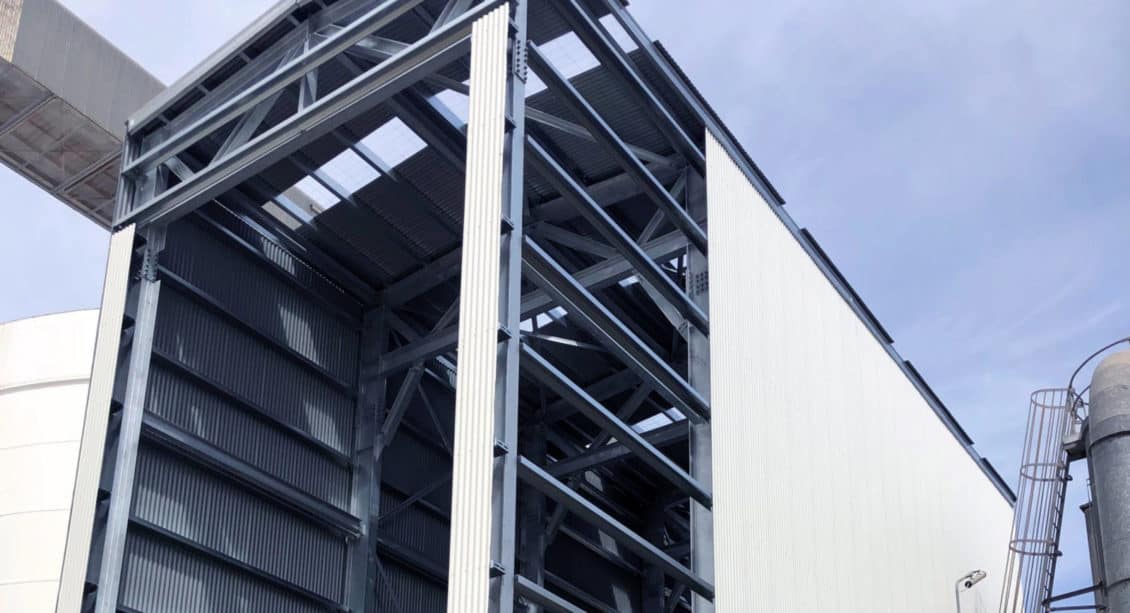 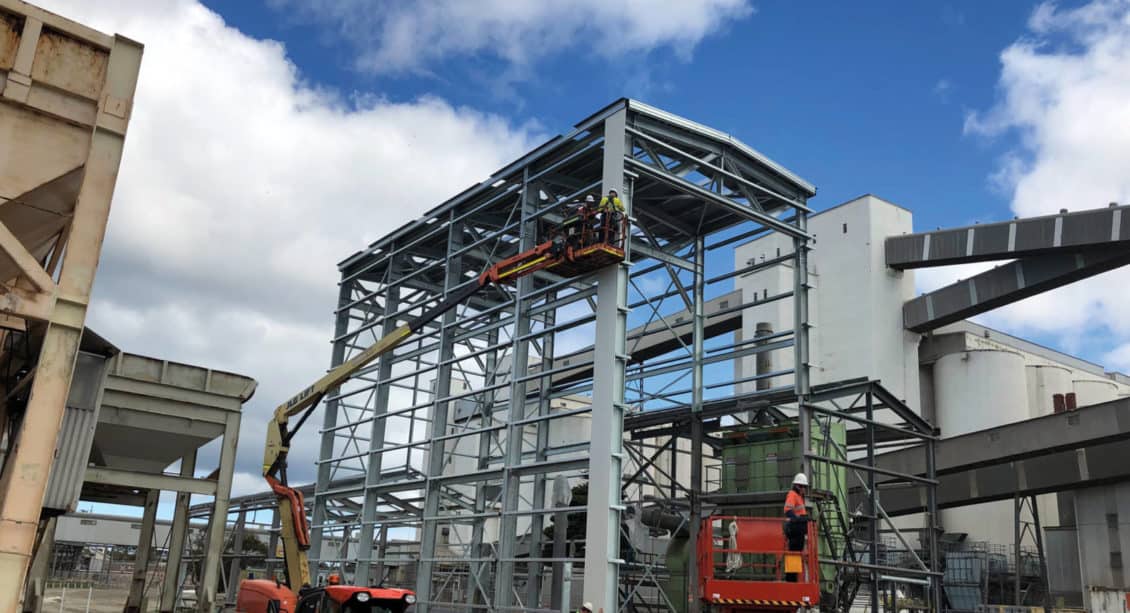 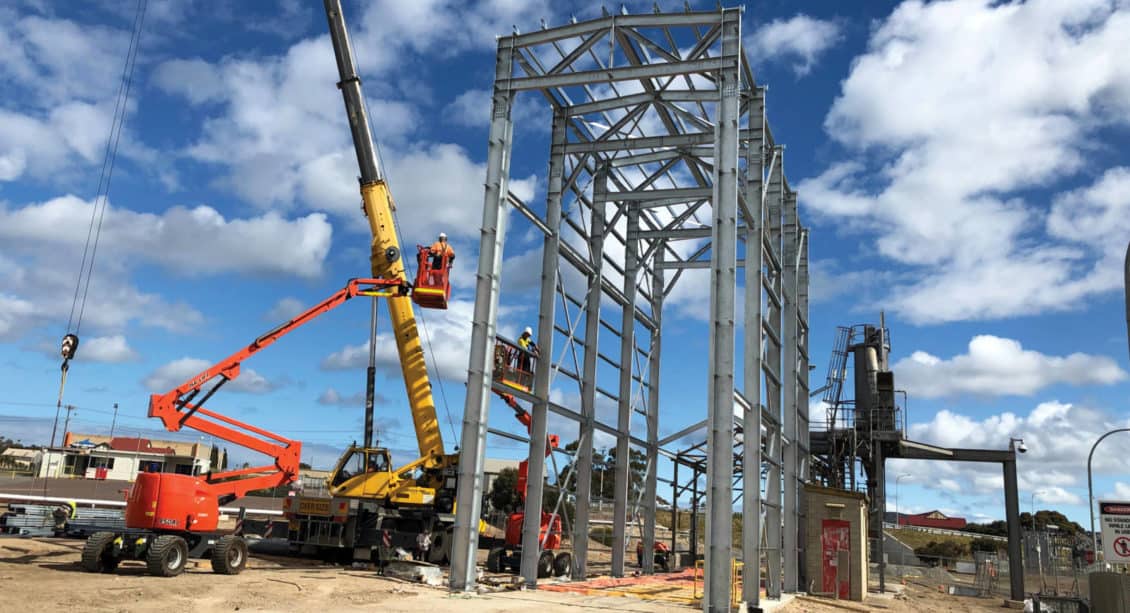 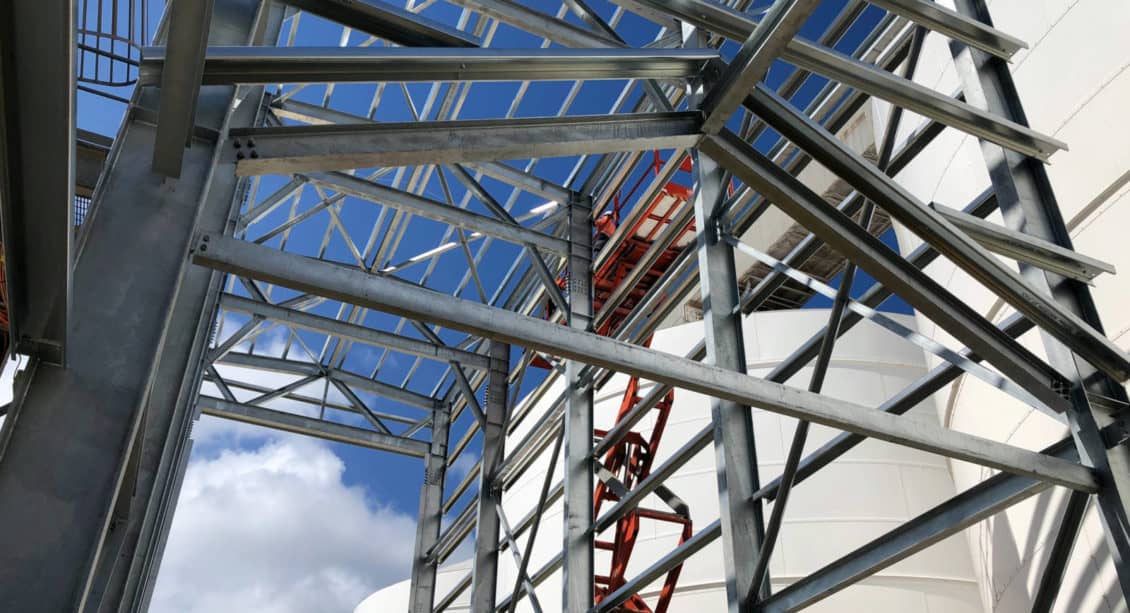 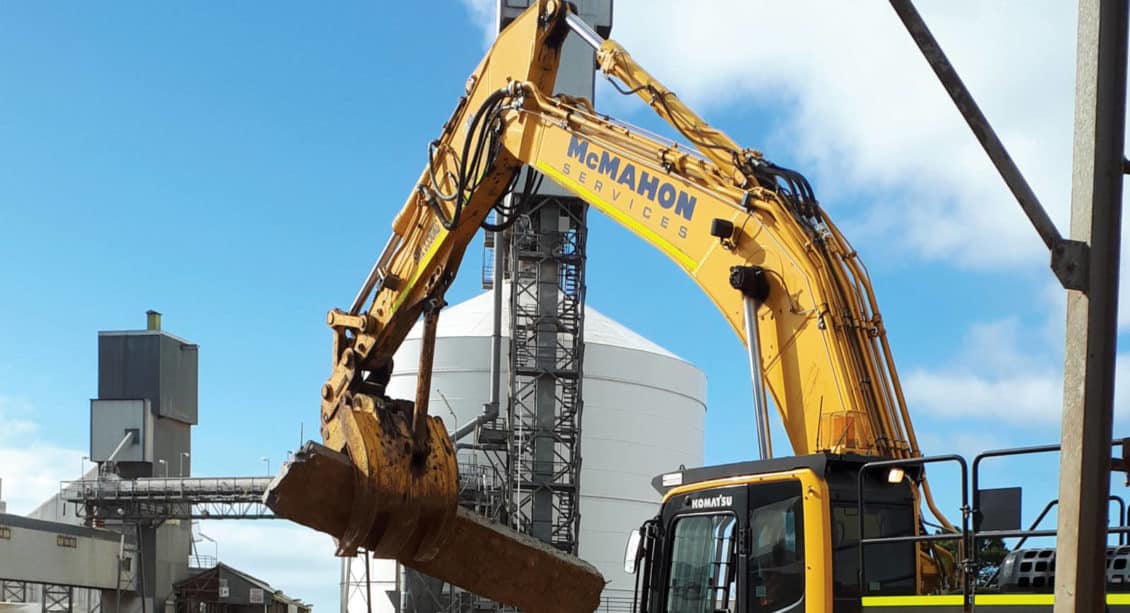 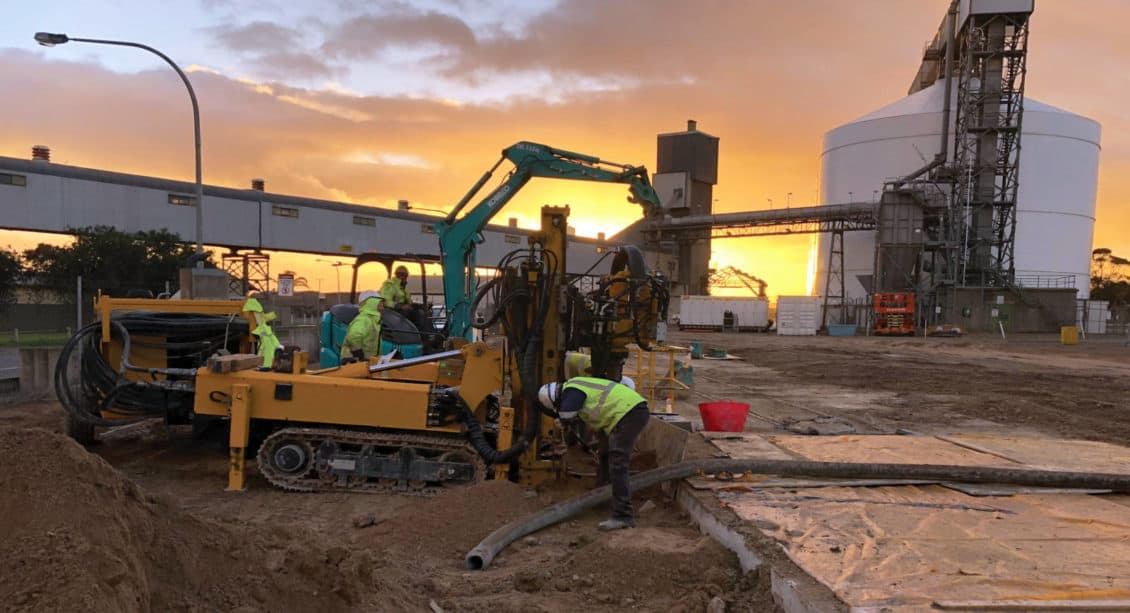 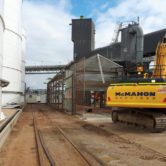 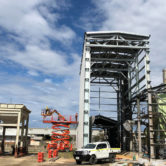 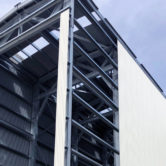 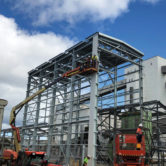 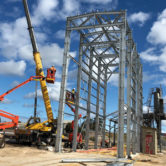 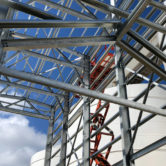 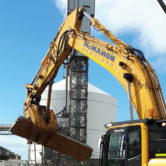 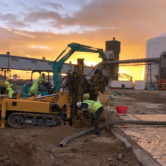 Viterra’s Port Lincoln Export Terminal is situated at the southern tip of Eyre Peninsula, 682km from Adelaide by road and 280km west by air. A natural deep-water harbour makes Port Lincoln attractive to large bulk grain carriers for topping up loads from shallow ports in South Australia and Victoria.

In 2019, Viterra made the decision to transition to road transport for the movement of all grain on the Eyre Peninsula, from 1 June 2019, to ensure they continued to provide growers and exporters with a competitive supply chain. The decision was essential to ensure Viterra provided an efficient and cost-effective service to grower and export customers, to ensure South Australian grain is competitive internationally.

The logistical change required the three existing rail unloading sheds at the Terminal to be converted for road train access and to facilitate tipping trailers. As part of the conversion process, 50% of the shed structures were raised to approximately 15m high to accommodate road trains tipping internally, conversion, replacement and upgrade of various mechanical and electrical items within the sheds, which included dust extraction ducting. Rail infrastructure in and around the unloading facility was integrated into the new access roads and pavement designs rather than removing the rail.

A key project challenge for Viterra was to ensure all conversion works occurred prior to the upcoming harvest season, to ensure grower and export customers were provided the most efficient and cost-effective service. Due to the complexity of the scope and the multiple challenges the project faced; Viterra entered into a collaborative Early Contractor Involvement (ECI) process with McMahon Services to develop a cost-effective solution for the works.

The McMahon Services team consisting of Project Managers, Estimators, Designers, Schedulers, Site Foreman and Engineers, in conjunction with Viterra and Consulting Engineering firm GPA, developed a fully scoped and costed program of works that delivered the project in time for the upcoming harvest season.

Tonkin were engaged to design new access roads and pavements that incorporated and covered the rail (which needed to remain), to guarantee pavements met their design intent and load requirements while ensuring there was no requirement to remove the railway infrastructure. Consulting engineering firm GPA provided all other designs.

The works factored in the requirements of multiple stakeholders including Viterra, City of Port Lincoln Council, Flinders Ports, rail asset owners Genesee & Wyoming Australia, the Department of Planning, Transport and Infrastructure, Viva and Caltex who operated a diesel pipeline within the project site boundaries.

All works packages were fully scoped, priced and market tested. Packages were either self-performed or awarded to specialist subcontractors depending on who provided the most cost effective and risk mitigated offering, with opportunities to support local industries investigated. A fully costed Total Outturn Cost was developed for the project, with a gainshare profit sharing arrangement for works being delivered.

The Early Contractor Involvement process ran from early May to mid-June 2019 resulting in a fully scoped, design and costed solution. The ECI process allowed for works to commence on site mid-June, well ahead of any schedule possible under a traditional design and construct delivery model.

Works on site included the conversion of three railcar sheds from rail to road access, and the construction of new access roads incorporating the covered existing rail.

Shed construction required the demolition of half of each existing shed while retaining key items required for operations. New structural steel totalling 120t was installed, raising 50% of the shed heights from 6m to 15m, and connecting the new structure to the existing structures. New roofing and cladding was installed on all sheds. Other works included electrical installations and upgrades including lighting and power, installation and commissioning of new fast-acting roller doors, fire services, and mechanical services upgrades including compressed air, dust extraction and pneumatic conveying systems.

Civil works included piling and concrete works for the shed conversion works, and the construction of new roads including earthworks, stormwater, pavements and asphalting, fencing and signage. Earthworks totalled 3500m³ and over 1900m² of asphalt laid.

Conversion of railcar sheds from rail to road operations

Each railcar shed includes a tunnel with a pneumatic conveying system. Previously trains would shunt into the shed and deliver grain into a below ground rail hopper via a belly dump mechanism. The grain was then transferred onto a reclaim conveyor system and stored in the Port Lincoln silos. With the conversion works required to facilitate the delivery of grain by a road train, the structural steel supports within the hoppers had to be redesigned to accommodate the change in road train axle centrelines.

The design determined that half of each existing railcar shed required demolition and lifting the roof height to approximately 15m. This enabled road trains to travel through the shed and be able to fully elevate trailers and tip safely within the confines of the shed, dumping grain directly into the existing hoppers. The challenge was integrating the new structural, electrical services, mechanical services, roofing and cladding designs to fit with the retained and pre-existing structure, ensuring the connection details between the old and new railcar shed elements were compatible, and the integration was aesthetically pleasing.

During the early contractor involvement phase, it was identified that converting the sheds and raising the roof height was the most cost-effective method and one that could be delivered within the required timeframes.

Grain dust explosions can occur when there are high levels of airborne dust in an enclosed area – and when it is in the presence of an ignition source. To mitigate this risk, all electrical devices were designed and installed in accordance with requirements for combustible dusts.

A retaining wall was required to be constructed through part of the site to facilitate road train turning arcs within the limited space available on site. Adjacent to the retaining wall location was a redundant diesel fuel line. As part of McMahon Services’ risk mitigation strategy, and in conjunction with Caltex, this 48.7m fuel line was removed during wall construction and then successfully reinstated.

The project team had a short window in which to deliver the works prior to the upcoming grain harvest. This required a tight program where design for some elements of the works were being completed while construction in other areas were already underway. The project team worked closely with the designers to ensure the completion of design elements integrated with the fast-tracked construction program.

While it was critical that all three shed conversion works were complete and fully operational at the commencement of the next grain season, the project team optimised the program so that at least one individual railcar shed was completed early as a contingency to allow for partial operations should the project be delayed.