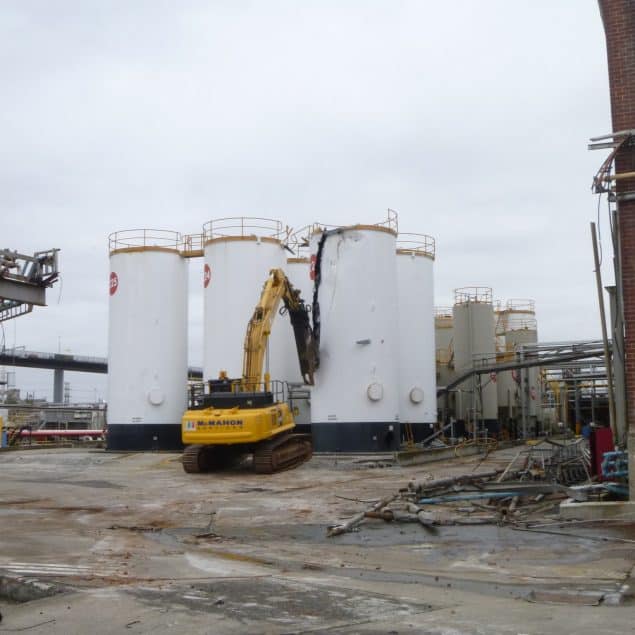 McMahon Services was commissioned on this high-risk project to demolish and remove approximately 96 above ground storage tanks and associated buildings at a mothballed lubricants production and distribution facility, located within an operational petroleum terminal, in Melbourne, Victoria

Some of the demolition work had to be undertaken near high value terminal assets, such as high voltage substations, product pipelines and terminal fire systems. Before the works commenced, all 14 members of McMahon Services’ team completed site specific safety training and inductions, which included our client’s safety system known as the Loss Prevention System (LPS). The training resulted in a full appreciation, implementation and incorporation of LPS principles, creating a safety focused culture across the site.

Prior to the demolition works, 9,000 square metres of asbestos roof sheeting was removed from four buildings. Additional asbestos removal work, which included the removal of bituminous floor coatings, pipe gaskets and wall cladding, was also completed by the team.

Ninety six above ground storage tanks were removed and demolished using a combination of excavators and cranes. Any residual hydrocarbons were removed from the tanks; ACM gaskets and Synthetic Mineral Fibres (SMF) lagging were segregated and disposed of before the tanks were validates as hydrocarbon free.

This phase of the works also involved the high-risk lifting of the redundant terminal tanks over the high voltage substation next to high voltage power lines.

As part of the building scope of works, 15,000 square metres of buildings were demolished ranging from single storey to multi-storey buildings, up to 15 metres in height. Demolition of a 25 metre high-rise packaging hall was completed using our specialised PC1250 excavator with hydraulic shear. The high-rise building was demolished adjacent to an active pipe rack supporting product pump lines, fire water ring main and pigging lines. To mitigate the risks, our team constructed customised scaffold protection for the pipe racks during demolition works.

The termination of services and area handover provided the greatest challenges on the project. However, a well-defined terminal communication and reporting structure was the cornerstone of the project’s success. Active communication between the demolition team and the terminal employees overcame these issues with little or no impact to the demolition schedule. Commitment on both sides to achieve common project outcomes allowed for creative and timely changes to work schedules when faced with possible delays. 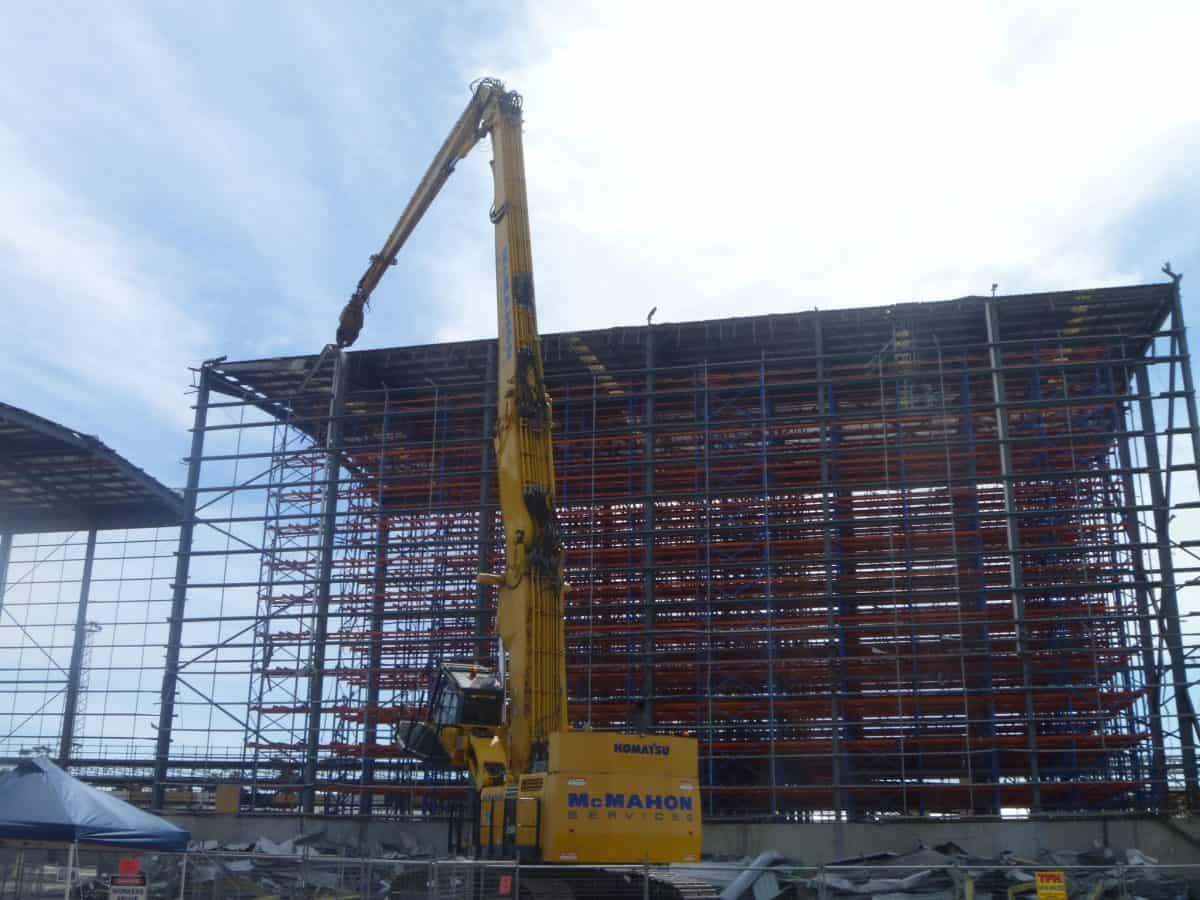 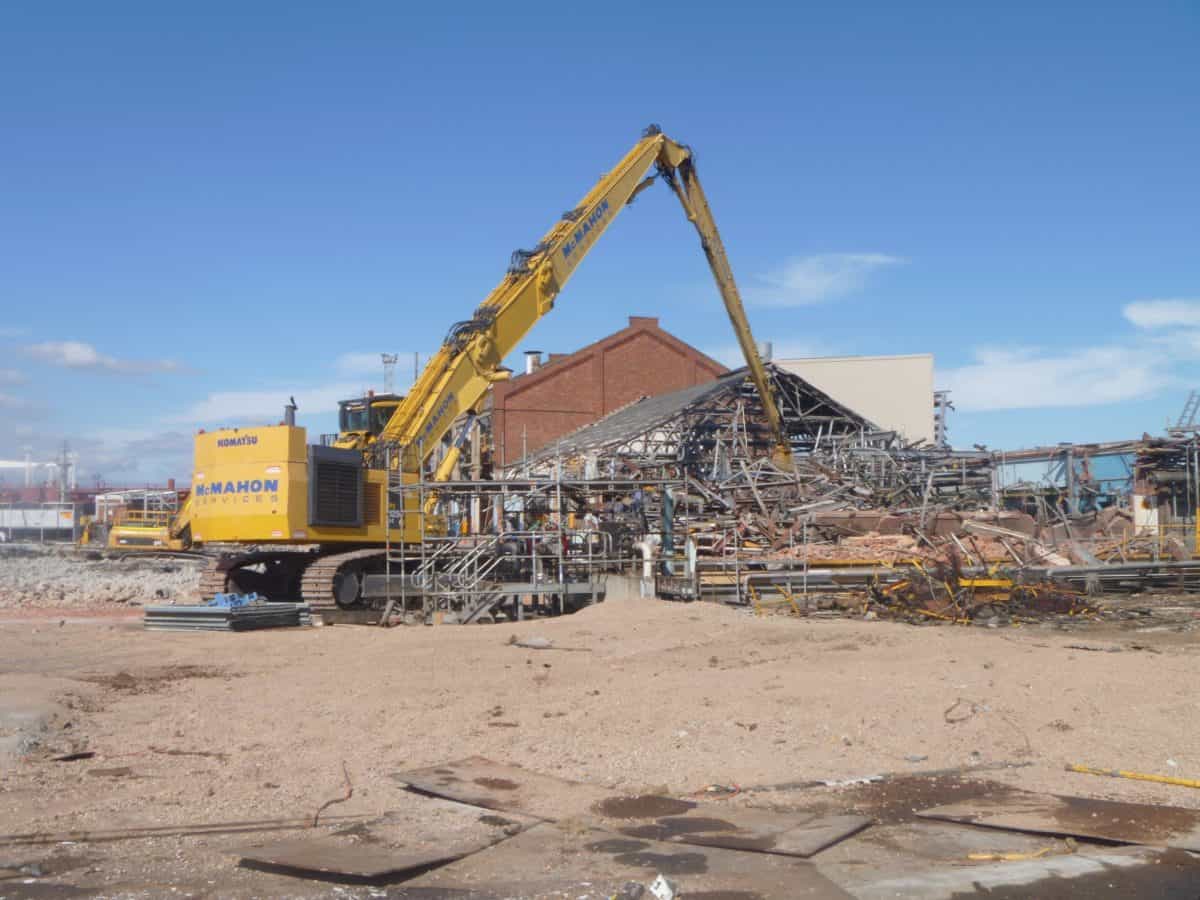