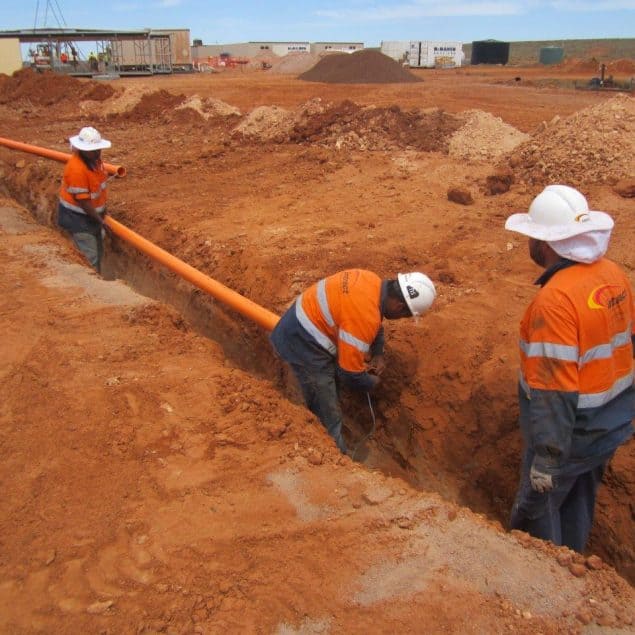 A unique business called Intract – Indigenous Contractors developed to train, employ and open long term career pathways for Indigenous Australians was officially launched in Adelaide in September 2011. Intract provides contracting services to the mining and civil construction industry and is a joint initiative of the Aboriginal Foundation of South Australia and leading construction, industrial and environmental services provider, McMahon Services.

In partnership with the Australian Government, Intract will initially recruit 40 Indigenous people over a two year period and provide them with skills training and mentoring to help them gain sustainable employment in the construction industry, and deliver benefits back to their own communities.

“This project is providing job readiness training, employment, cultural awareness and mentoring services to the Indigenous South Australians participating in the program,”
Senator Arbib said. “Through collaboration between state and federal governments, business and industry, we are building and strengthening job and training opportunities for Indigenous Australians from across South Australia.”

“I know that this project is making a huge difference to the lives of Indigenous people in South Australian communities, by giving them the opportunity to earn economic
independence for themselves and their families.”

Intract is being led by General Manager, John Briggs – a proud Indigenous Australian with extensive experience in the construction and mining sectors. He has also spent six years training and mentoring Aboriginal workers in the Western Australian mining industry. “Mentoring, teaching and employing our trainees is just one area of Intract,” John said. “We also want to forge meaningful and mutually beneficial relationships with local Aboriginal people and involve them in culturally sensitive training, employment and community relations programs.

“Our broader vision is for Intract to help Aboriginal people further develop their communities and create their own opportunities for wealth generation.” Intract’s Indigenous labour force is supported by McMahon Services’ highly qualified construction services staff and the company’s $40 million network of plant and equipment throughout SA, WA, Queensland and the Northern Territory.

McMahon Services Managing Director, David McMahon, said Intract further builds on the organisation’s commitment to working with Indigenous Australians. “We see it as a responsibility of McMahon Services to provide Aboriginal people with training and employment so they can build a better future for themselves and improve their own
communities,” David said. “McMahon Services has been exposed to the rich culture of Australia’s Indigenous people through our work in South Australia’s APY Lands and in more than 100 Aboriginal communities stretching from Alice Springs to the Tiwi Islands.

“These projects have allowed us to see first hand the benefits and enthusiasm generated by providing indigenous communities with new opportunities.”

Aboriginal Foundation of South Australia Chief Executive Officer Grahame Tonkin said support from key stakeholders including the Australian Government and the Bedford Group has already seen Intract’s first graduates working across SA. “It is fantastic that this business is now seeing people take part in projects around Adelaide, Milang and Woomera,” Mr Tonkin said. “Not only are the Intract participants learning new skills such as heavy machinery operation, they also have ongoing access to mentoring and can further build their careers as they work on different projects and gain professional experience.

“If we succeed in securing full time employment for 20 people in the first year of the Intract initiative, we will have made a big difference – not only to the individuals, but also to their families and the communities they live in.

“By partnering with McMahon Services I feel very positive about the ability of our graduates to perform in the growing mining and construction sectors.”