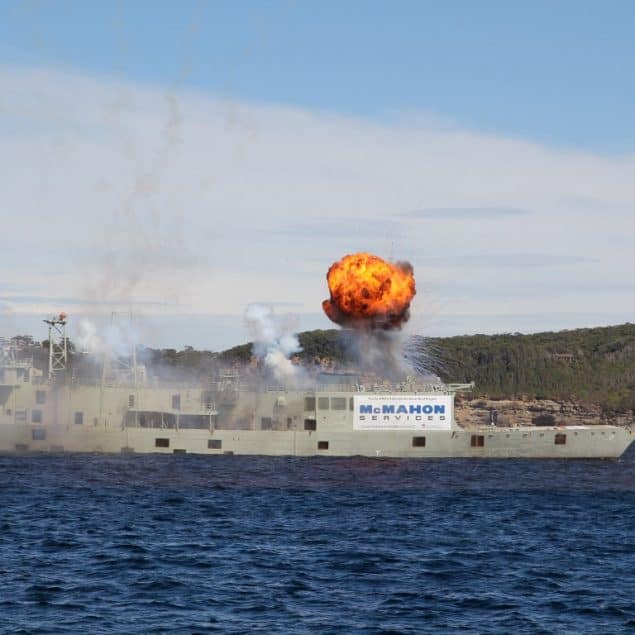 After more than two years of planning and preparation the ex-HMAS Adelaide has reached its final resting place on the bottom of the sea, 1.8 kilometres off Avoca Beach on the New South Wales central coast.

Leading demolition and construction services company, McMahon Services, was commissioned by the NSW Government’s Crown Lands Division to carry out a rigorous and thorough program to ensure the former navy vessel was scuttled safely before beginning its new life as a world-class recreational dive site.

McMahon Services’ General Manager, Andrew McMahon, said the ex-HMAS Adelaide will be a fantastic dive experience with access to more of the vessel than any other dive wreck in Australia. “We removed and modified the vessel’s machinery spaces, bulkheads, non-structural partitions and decks to make the vessel safe and more interesting for divers. This has also included inserting barriers for unsafe areas without obstructing views, and altering sections of the ship to allow light to penetrate,” he said.

“In addition to existing door and window spaces, we cut a series of extra holes to enhance the experience for recreational divers. The project has been exciting and extremely challenging. We effectively stripped a ship from inside out – there’s not one surface that was left untouched. A total surface area of 350,000 square metres was cleaned by hand and the removal of more than 500 tonnes of equipment from the vessel was a mammoth task.”

The program included the removal of:

The ex-HMAS Adelaide was scuttled successfully on Wednesday 13 April 2011, with thousands of people looking on from the surrounding bays, and millions more following the event on television. The 138-metre vessel only took a little more than two minutes to sink, and is now sitting upright on the ocean floor, ready to welcome the first recreational divers from Thursday, May 5, weather conditions permitting.

Mr McMahon says to sink the vessel, a series of cutting charges had been prepared and were attached to the hull of the ex-HMAS Adelaide below the waterline. “The linear cutting charges consisted of an explosive core and an external copper sheath which cuts the steel by forming a jet of liquefied copper,” he said.“The low speed explosive charge caused a collision of the external copper sheath, effectively melting the copper strip and forming a plasma jet which cut through the ship’s hull. The cutting charges were designed to simultaneously blow eight holes, approximately one square metre in size, in both sides of the ship’s hull. We had also cut 19 holes in the ship’s
hull above the water line to assist the sinking process.”

To visually enhance the occasion, a series of pyrotechnic explosions took place on the vessel’s deck as the cutting charges detonated below the water line. Following the sinking of the vessel professional divers descended to assess the wreck, removing some panels and covers that had moved due the detonations, making sure the site
is safe for recreational divers.

McMahon Services has also laid six mooring buoys off each side of the vessel for dive boats visiting the site and a navigation buoy off the bow and stern of the scuttled vessel to warn passing ships.