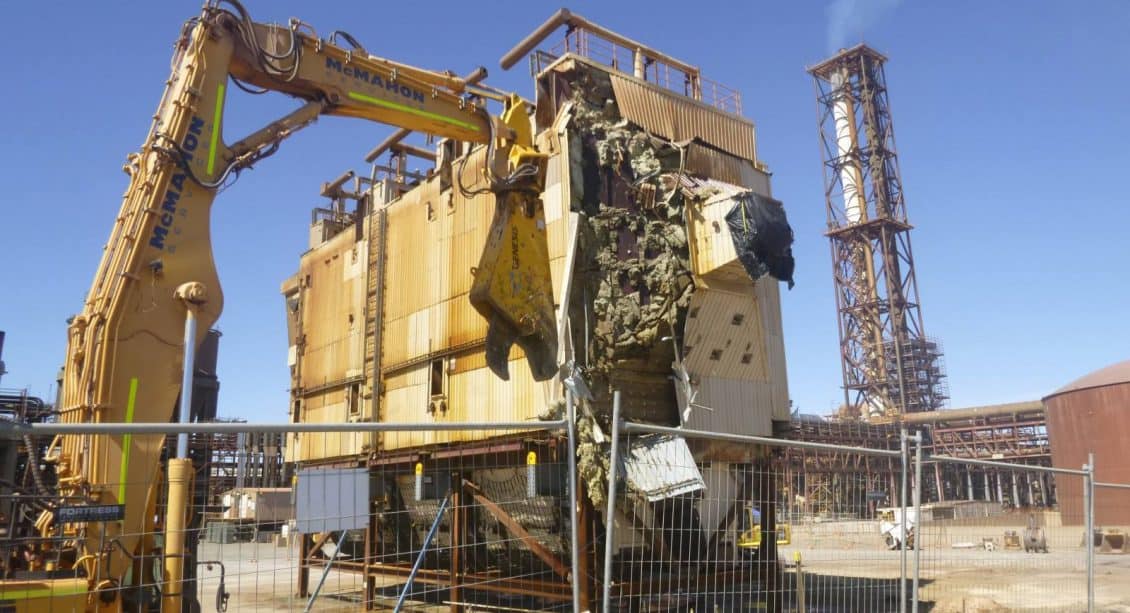 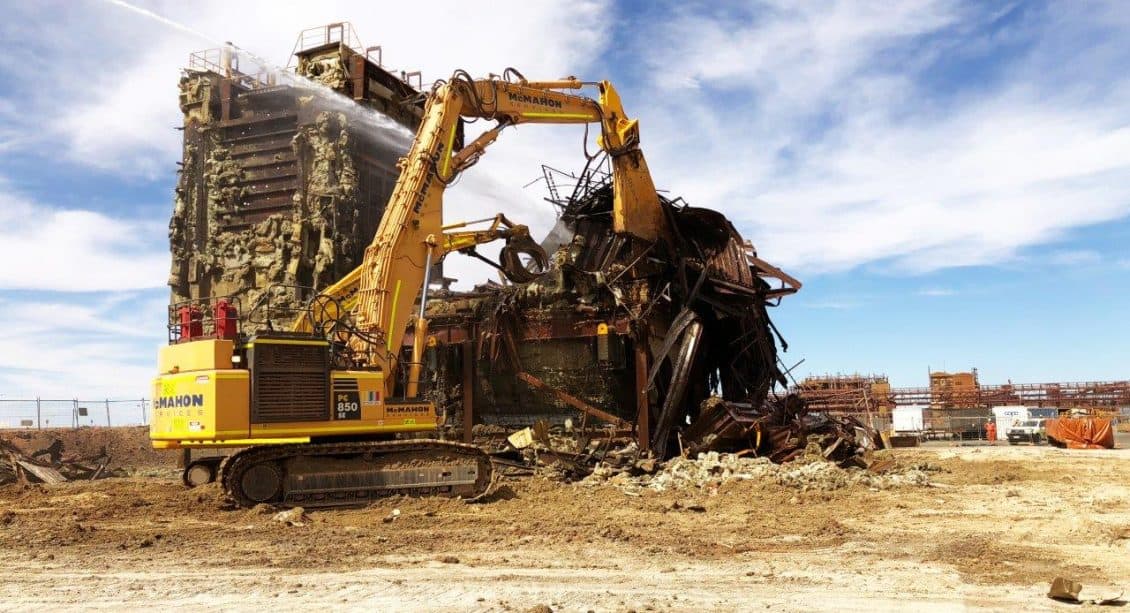 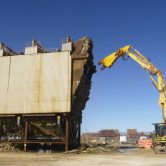 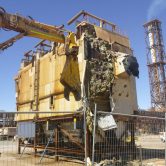 Olympic Dam Mine located 560km north of Adelaide, is one of the world’s largest deposits of copper, gold and uranium and also has a significant deposit of silver. BHP’s Olympic Dam mine operates as a fully integrated processing facility transforming ore to metal.

McMahon Services were engaged to undertake the demolition and disposal of the redundant five-storey high Electrostatic Precipitator at Olympic Dam, designed and built in 2003 as a predecessor to the 2017 replacement Precipitator currently in operation. Electrostatic precipitators remove suspended dust particles from the smelter processing gases by applying a high-voltage electrostatic charge and collecting the particles on charged plates.

The demolition site was first delineated as an Exclusive Control Zone providing ultimate control to McMahon Services so that the inherent risks of mechanical demolition could be controlled. One of the inherent risks associated the demolition of the Electrostatic Precipitator was the large quantity of synthetic mineral fibres present as insulation which encased the vessel to maintain the heat during operations. Potential synthetic mineral fibre presented health risks during demolition including upper respiratory tract irritation, skin and eye irritation.

To mitigate these risks, McMahon Services proposed the full mechanical demolition approach using a 110t Komatsu PC850 Demolition Excavator with an 8t Genesis shear capable of cutting through 70mm steel plate. The PC850 was supported by a PC300 Demolition Excavator with a grapple attachment to clear away demolished sections. With the use of temporary fencing, the Exclusive Control Zone was established with an internal Active Demolition Zone. All operators remained inside the cabins of their respective plant when within the Active Demolition Zone and all plant was fitted with the required air filters to mitigate any process dust or mineral fibres reaching them.

Prior to the main demolition activities, a water truck with a water cannon supported by ground personnel kitted with the appropriate personnel protective equipment washed down the Electrostatic Precipitator. All water used at all stages of demolition was collected and disposed of in the appropriate tailings locations on site as directed by BHP, pumped out using a Hydro Vac Truck.

The PC850 Demolition Excavator’s first activities were to strip the sheet metal cladding and insulation off of the Electrostatic Precipitator. The water truck continuously washed down demolished areas as they were exposed to suppress any dust present and to significantly reduce the potential for any insulation becoming airborne.

A similar process was then applied through each stage of the demolition. The precipitator comprised of three bays and each was demolished sequentially from the casing, to the internal plates, hot roof, hoppers, conveyors, ring beams, box beams and structural supports. The demolition produced 450t of scrap metal, cut down to a minimum 2m by 2m pieces for easy of transportation.

Demolition waste was inspected, assessed and classified by BHP radiation technicians to allow for appropriate segregation and to ensure transport of waste to appropriate disposal areas within the Resource Recovery Centre.

Olympic Dam applies a criterion of 3700Bq/cm² to define surface contaminated objects as radioactive. The radiation technician advised on the correct disposal pathway for each element of waste. Waste was segregated by classification to enable ease of transport to the correct disposal area and removed the double handling. A completed ‘Notification of Contaminated/Low Level Radioactive/Hazardous Waste for Disposal’ (Olympic Dam Document No. SMS095) accompany each load.

The average radiation doses to site personnel was equivalent to less than 1mSv per year, which is approximately half the typical natural background radiation in Australia due to naturally occurring environmental radiation. This exposure was well below the International Commission on Radiological Protection (ICRP) dose limit recommendations and also well within the requirements of the Robxy Downs (Indenture Ratification) Act 1982, Radiation Protect and Control Act 1982 and the ‘Code of Practice and Safety Guide on Radiation Protection and Radioactive Waste Management in Mining and Mineral Processing (2005)’.

All scrap steel from the Electrostatic Precipitator was taken to the Contaminated Waste Facility located in the BHP Olympic Dam site. Scrap steel totalled 450t. Due to the radioactivity of all scrap materials, cleaning was required in order to either bring the radiation levels down to an acceptable level to be taken to landfill to be buried or to an even lower level in order to be taken offsite for steel recycling. Scrap steel was cleaned using a combination of ultra-high and high-pressure water systems within contained wash bays.