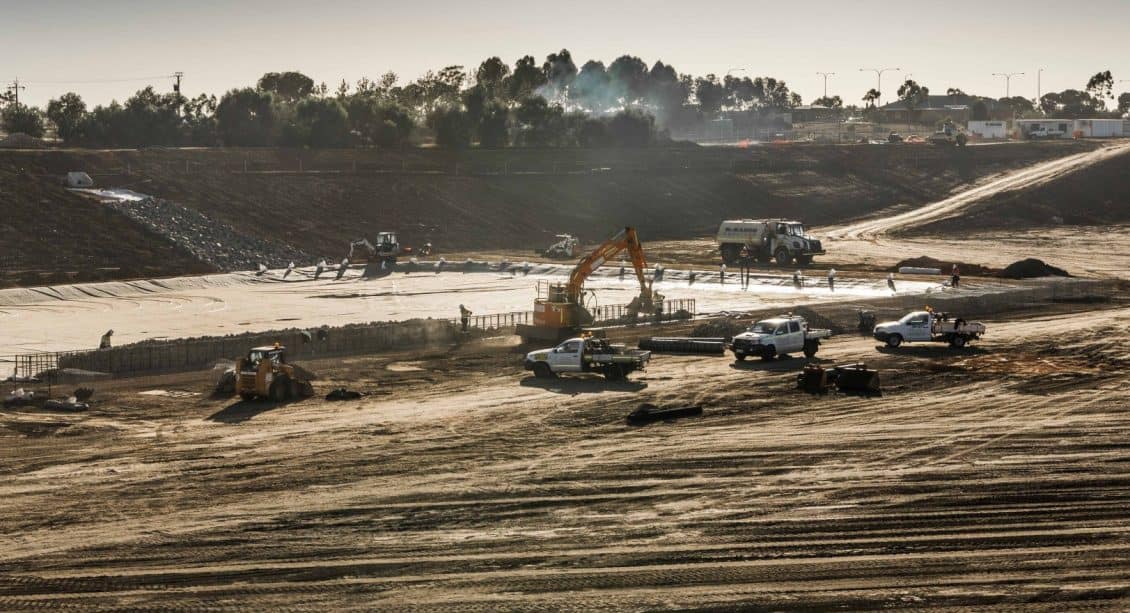 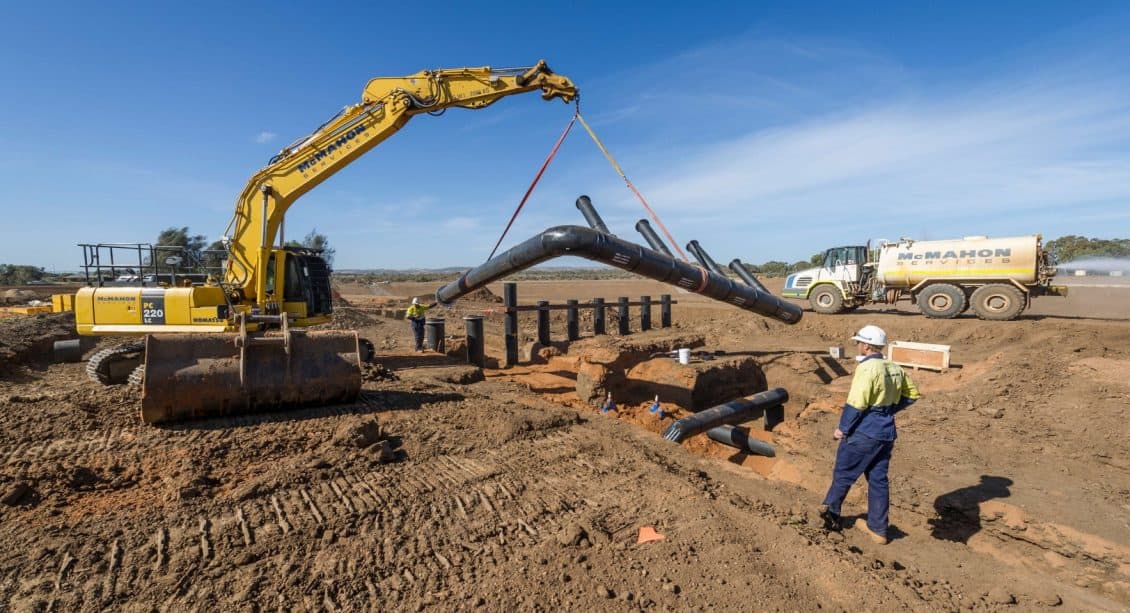 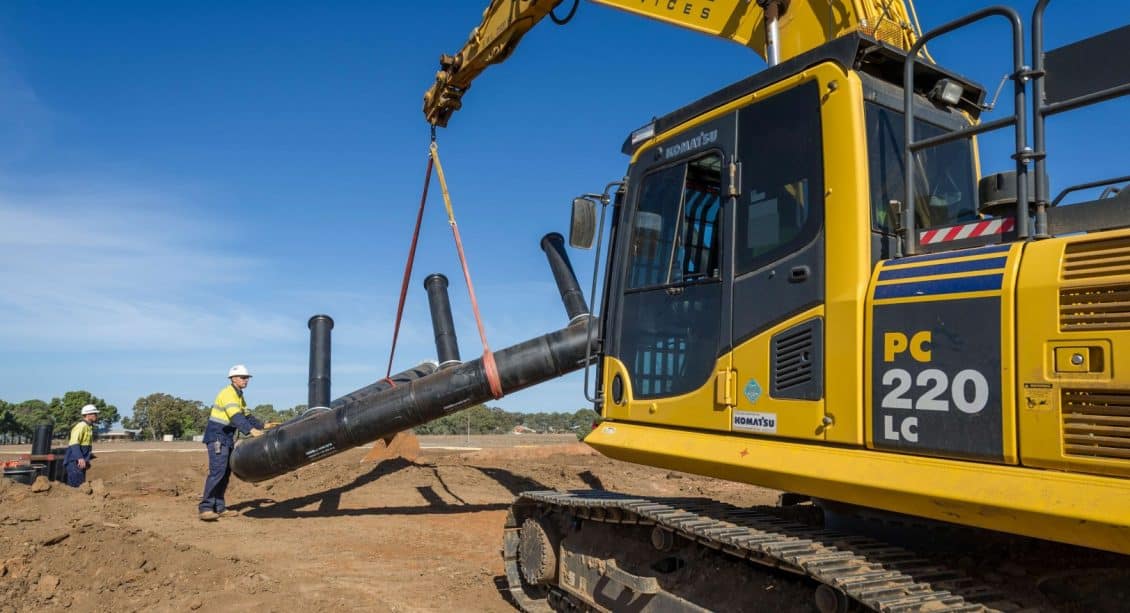 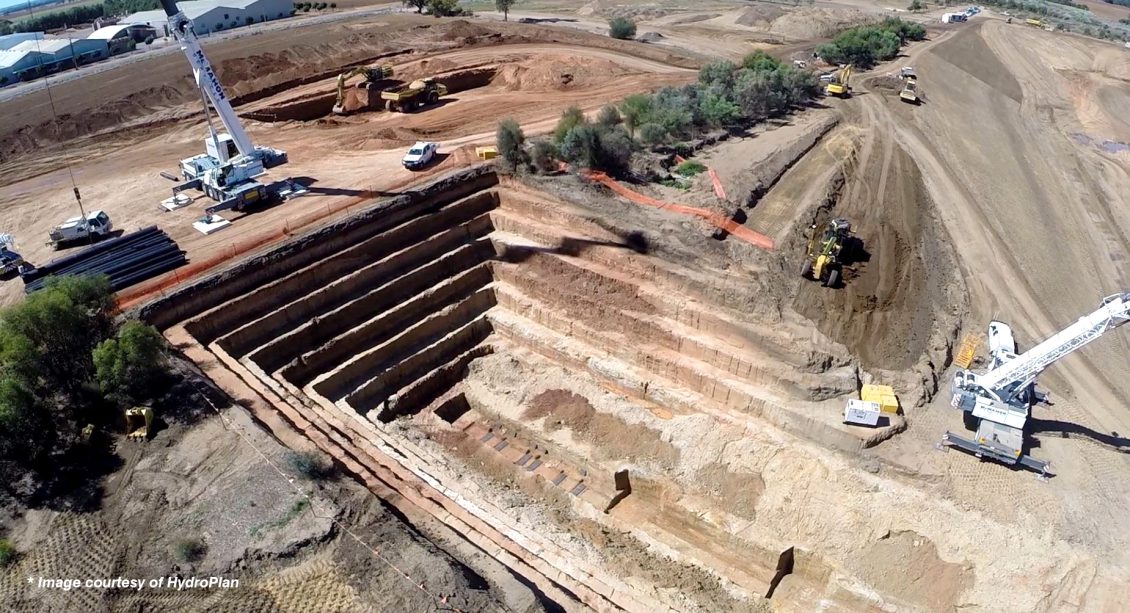 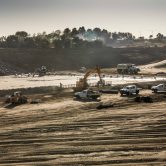 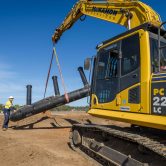 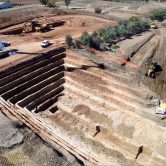 The Light Regional Council is a local government area North of Adelaide bordering the Barossa Valley and the township of Gawler. In 2011, the Council identified a need to improve water supply to local businesses and organisation both within the Council boundaries and adjacent areas including wine growing regions in the western Barossa Valley. In response, Light Regional Council formed and funded Bunyip Water Pty Ltd to build and operate the Gawler Water Reuse Scheme. Funds totalled $21.4 million including $10.7 million in funding from the Australian National Urban Water and Desalination Plan.

The objective of the Scheme was to utilise urban stormwater harvest from the Gawler River into an adjacent borrow pit and reuse the captured water within the surrounding region to offset existing potable and groundwater use. Expected outcomes were to reduce the potable water demand by 800ML/year of water previously sourced from the Murray River, reducing the impact of urban runoff on local waterways and ecosystems, and to improve the amenity of local community ovals and sports fields.

In March 2015 Bunyip Water engaged HydroPlan, an Australian water infrastructure management solution company to act as the design engineers and construction managers for the Scheme. Installation of works included:

Wingate Basin is adjacent to both the Northern Expressway and Gawler River and is located in the southwestern extent of the Scheme. One pump station (Pump Station 1) lifts stormwater from the Gawler River bypass channel when a stream gauging station triggers harvesting, typically when flows are above the environmental threshold of 616L/s. The system design ensured that when Wingate Basin fills with stormwater that water can then be on-pumped (Pump Station 2) approximately 27km Northwest into the Hill Dam.

McMahon Services through a competitive tender process was awarded the contract to deliver the Wingate Basin Civil Works. Early geotechnical testing determined that the basin could be clay lined using in-situ materials in lieu of much more expensive artificial liners. Bulk earthworks were designed to balance cut/fill and re-shape the existing borrow pit to maximise its storage capacity to over 430ML.

The inner Lower Basin, an artificially lined 5ML storage at the Northwest invert of the Wingate Basin was designed to store future overflows of recycled wastewater sourced from the nearby recycled wastewater Virginia Pipeline and control intakes into the Pump Station 2 manifold arrangement. Additionally, gabion baskets acted as filters around this area to naturally screen larger objects from the stormwater harvested via the river.

Early on it was identified that suitable clays required for the clay liner could be sourced from an adjacent paddock. After stockpiling, the clay liner was compacted to achieve a layer thickness ranging from the 300mm minimum required to 600mm in critical areas.

Clay liner and other local fill material identification provided significant project savings in terms of delivering times to site and associated haulage costs, significantly reduced traffic management egress and ingress from site, and savings from otherwise generated greenhouse gas emissions from the required haulage trucks. There was no requirement to source fill material from offsite locations or to remove spoil material offsite.

The already established relationships with neighbouring landowners proved fruitful, allowing for an easy agreement to borrow suitable clay from the adjacent paddock with no cost variation. The land was then later remediated and filled with excess soil sourced during the dam excavation.

Because McMahon Services was able to quickly mobilise to site company with our own owned and operated earthworks equipment, the majority of earthworks remained on track at all times and the majority of works were completed by April 2016. Excavation levels were modelled and recorded in the GPS systems installed in each excavator and grader on site, allowing for the finished embankments to be complete well within the design tolerances.

Earthworks were assisted by good weather conditions that resulted in almost no delays. Timing was optimal for seeding the embankments with grass, as autumn rains provided good conditions for turf growth to stabilise the basin embankments.

With the expected Gawler River flows in July and August 2015, it was decided that the wetland and embankment plantings would be deferred until the summer of 2016/2017. This was to avoid any flood damage that might occur due to prolonged inundation soon after planting and establishment. This decision proved to be the optimal course of action as the Gawler River received healthy flows in August 2016 which were harvested and stored in Wingate Basin.

The Wingate Basin has a depth of 8.7m below the floodplain and thus required a careful design of the pump intake manifold arrangement. Early on it was identified that if the Scheme were to require future expansions it would require additional pumps, and these would be difficult and expensive to install if the appropriate structural infrastructure was not already in place. Therefore, the constructed HDPE pipe manifold intake included seven risers to allow for the easy installation of additional future pumps, motors, electrical transformers, switch rooms and control rooms if and when required. Only three risers were fitted with pumps at project completion, allowing for up to four additional pump at a later date.

The location of the risers required extensive excavation and benching in a tightly constrained section of the works. Due to the excavation depths required, the intake and riser assembly was fabricated prior to installation within the chamber.

McMahon Services designed and fabricated a complex steel frame to ensure verticality of the structure upon lifting and placement.

The pump chamber and risers needed to be held in place whilst careful backfilling and compaction occurred around them. The top of the risers had a tolerance of ±30mm, which was achieved through the use of a temporary bracing system.

The intake inlet pit cover design was also changed from original design to allow for a single sheet of fibre-reinforced plastic to be slid on and off the top of the lid and held down with four bolts.

This option resulted in a lighter and easier to remove option to the original design that called for an aluminium cover raised in 4m by 4m sections.

Pump Station one required an 8m deep chamber which would be difficult to install with an insitu solution. Therefore, it was decided that the pump chamber would be constructed of precast concrete elements which included an 8t base and four incremental 2m high sections of 6t each.

The project team installed the precast elements using a McMahon Services owned and operated 100t crane. This required managing the logistics of bringing the crane to site, manoeuvring it into position without impacting the integrity of the embankments, constructing a crane pad and commissioning lift studies.

Works were completed without incident and provided significant cost savings to the overall works.

When McMahon Services mobilised to site in December 2015, the existing borrow pit contained stormwater discharge. The 35km pipeline had recently been completed linking the Wingate Basin and the still to be constructed Hill Dam. At the time vineyard irrigation in the Hill Dam area had nearly exhausted their River Murray allocations. McMahon Services worked quickly to install temporary pumps connecting the pipeline to the stormwater catchments sending water to the Hill Dam area. This action prevented significant crop yield losses to an estimated $30 million grape harvest and saved almost $200,000 in construction water costs associated with the Hill Dam project.

The project site was surrounded by farm properties, many of which featured paddocked horses and sheep. McMahon Services worked closely with local property owners to minimise and muffle machinery noises where possible to reduce the risk of distressing livestock, particularly horses. A horse’s sense of hearing is far greater than that of a human, and they can often be spooked by loud, sudden noises.

When McMahon Services mobilised our large fleet of earthmoving equipment to site it was identified that moisture conditions were almost perfect in the insitu soil for re-working the site and meeting compaction standards. Similarly, minimal dust was generated from the works due to the good moisture conditions prevalent at that time of year (mid-summer).

A significant outcome of the delivery strategy was that there was no need to source fill materials from offsite, dispose of excavated materials offsite, and all water used for compacting and dust management was either sourced from existing stormwater catchments in the borrow pit or was treated wastewater pumped in from the Bolivar Waste Water Treatment Plant 25km to the southwest. The significant savings to the project in terms of haulage that would otherwise be commonly experienced on a project of this size with the quantities of earth moved was significant, including carbon emission reductions from truck movements.

Modelling of and historical data sourced on the Gawler River flows demonstrated a variability in the security of supply of water to the Wingate Basin which would result in extreme variations in water levels. While regular stormwater inflows from natural drainage catchments would ensure that the invert of the storage would contain water, higher levels of the embankment would only be inundated for short periods during higher rainfall years. Maintaining the integrity of the clay liner would therefore be challenging and an innovative solution was required.

McMahon Services worked with HydroPlan to develop a layered landscape across the dam, which included native wetland plantings in the base and lower sections of the embankments, and turf grasses at higher levels. The irrigation sprinkler system near the top of the embankments ensured vegetation was watered during drier periods and ensured clay liner did not develop shrinkage cracks.

To ensure the invert was continuously covered in a layer of water, HydroPlan irrigation design engineers included in the design a connecting pipeline to treated wastewater from Bolivar Wastewater Treatment Plant, and providing for a future managed aquifer recharge expansion to include stormwater anticipated from the Roseworthy Township Expansion project, a rezoning of 560Ha of land that abuts the 35km pipeline route.

McMahon Services was the only significant contractor on site and self-delivered the vast majority of the works, and therefore interfaces with other project parties was at a minimal for the works. Major subcontracted works included the installation of geofabrics and EPDM dam liners, compaction testing, gabion wall and reno mattress construction, and high voltage installation oversight.

The only other significant contractor on site was SA Power Networks who were decommissioning several power poles and replacing them with new ones, installing a new transformer and commissioning the electrical works that McMahon Services installed. Both parties worked collaboratively ensuring no disruption or interference with each other’s schedules and delivery programs.

As well as operating as Construction Managers, HydroPlan were also the Design Engineers for the Scheme. McMahon Services worked closely with HydroPlan to ensure constructability of the design throughout the entire delivery process. This ensured that the final outcome delivered the Scheme objectives in the most cost effect means possible.

McMahon Services maintained constant communication with the neighbouring properties to ensure advanced notification of any works. These groups were provided with the contact details of senior personnel on the project should they have any concerns or queries during the construction period.