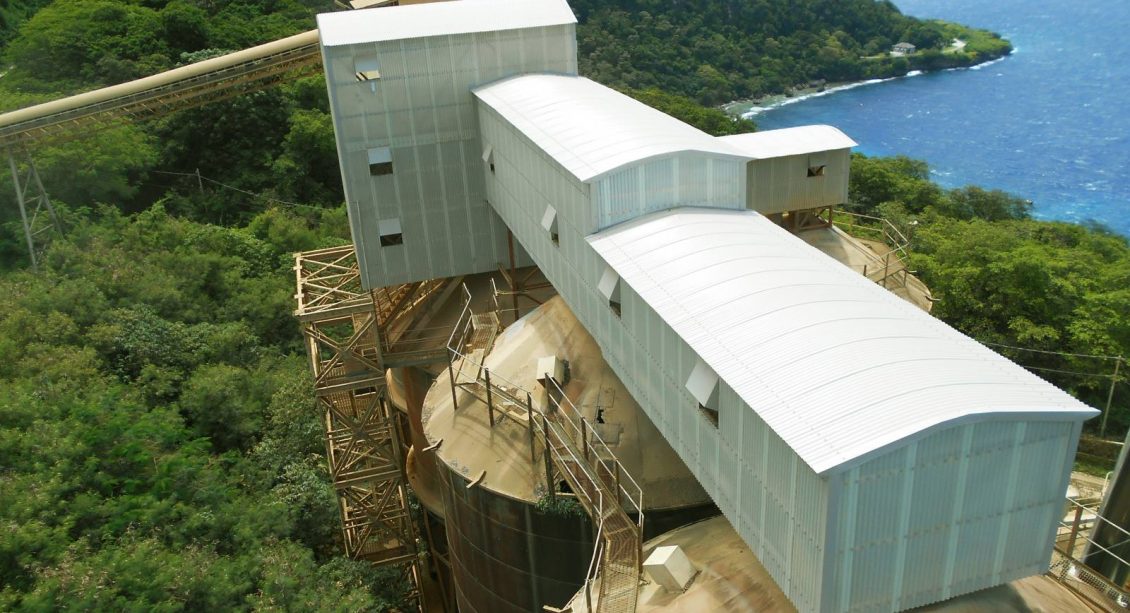 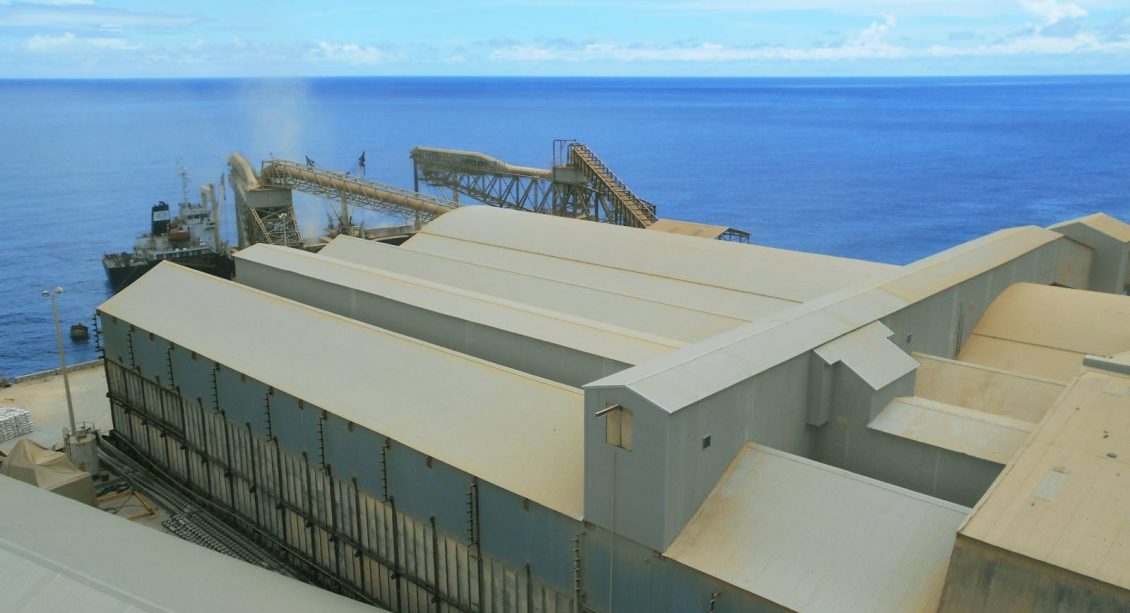 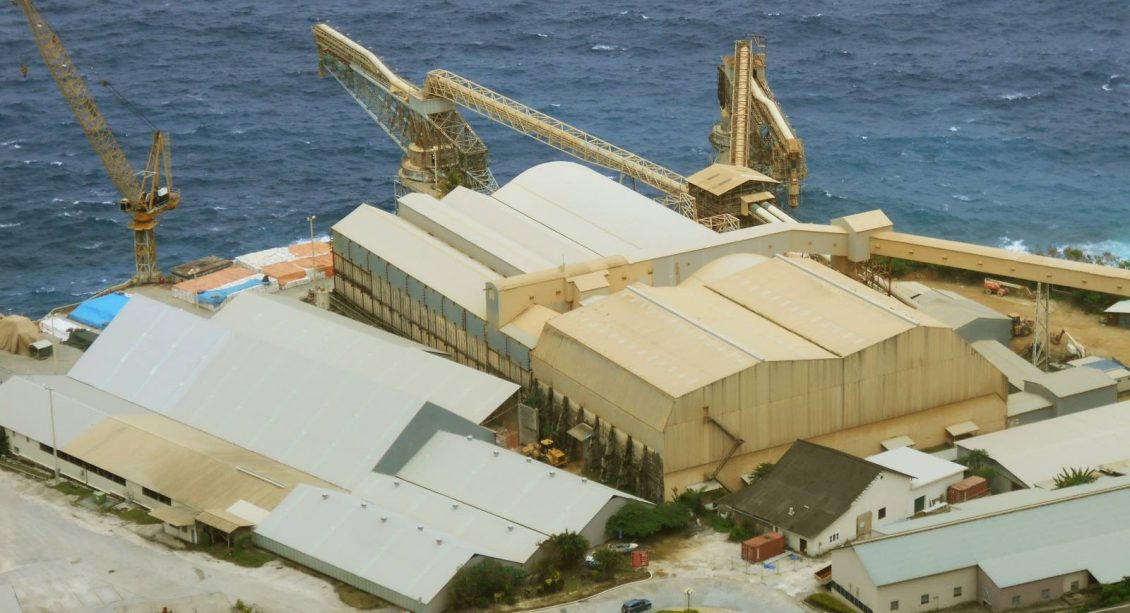 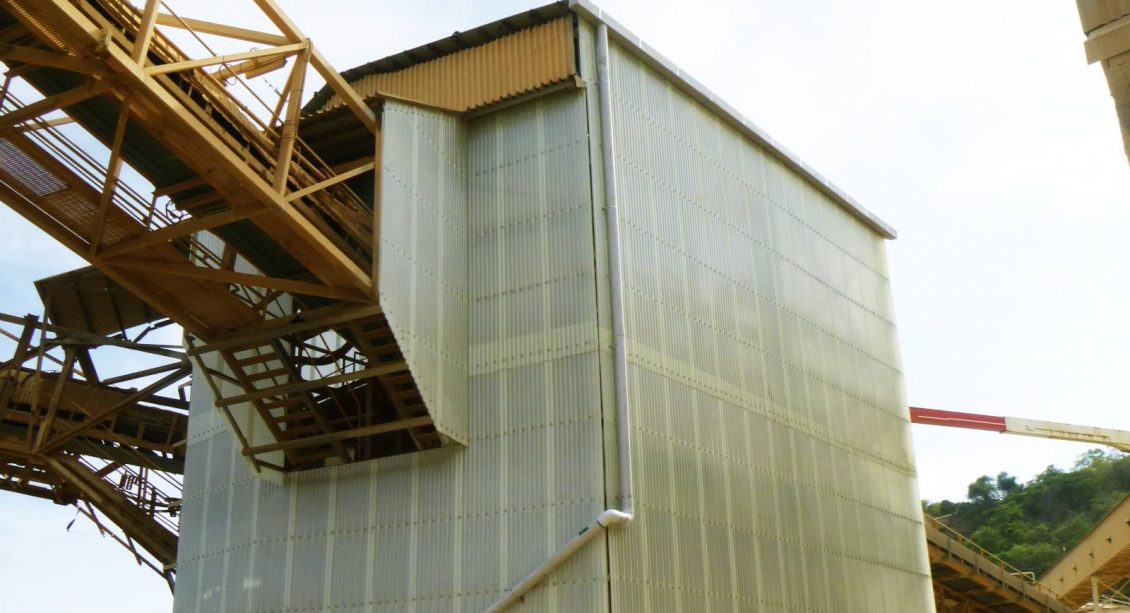 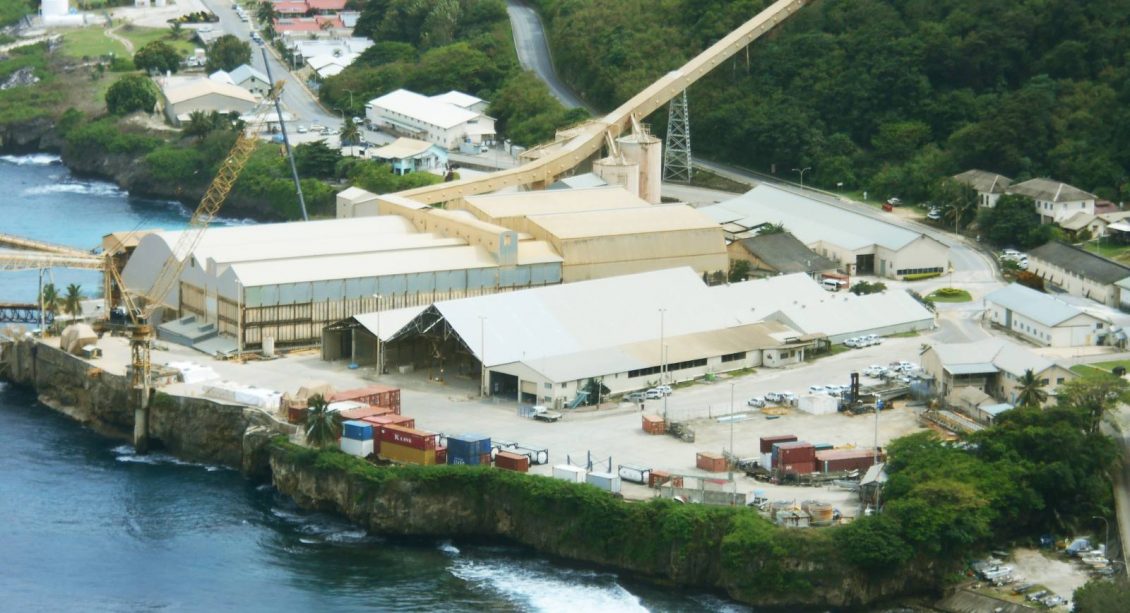 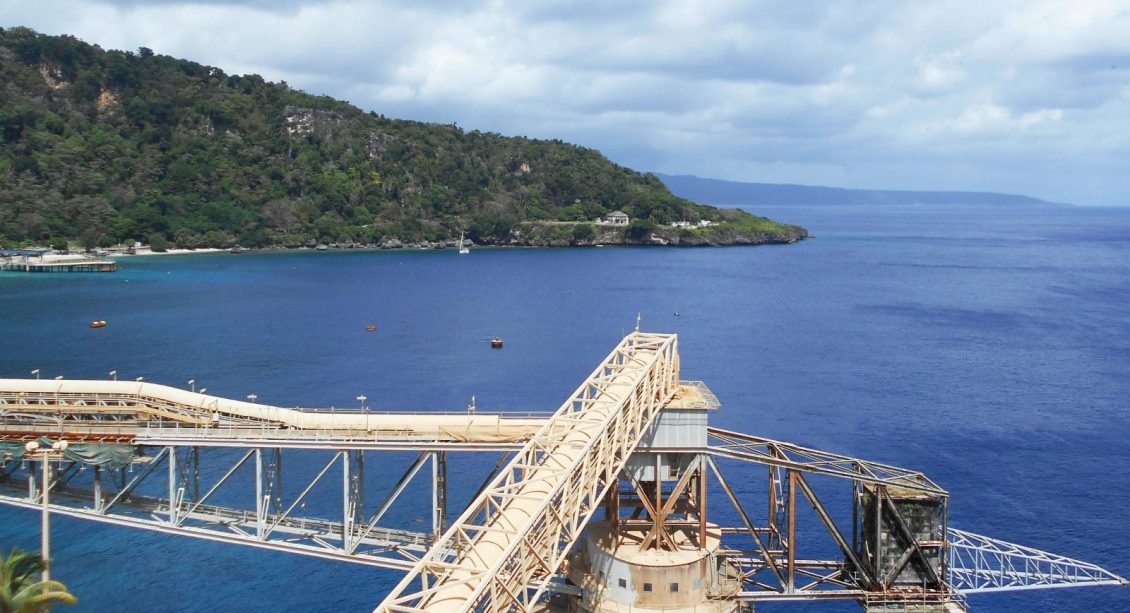 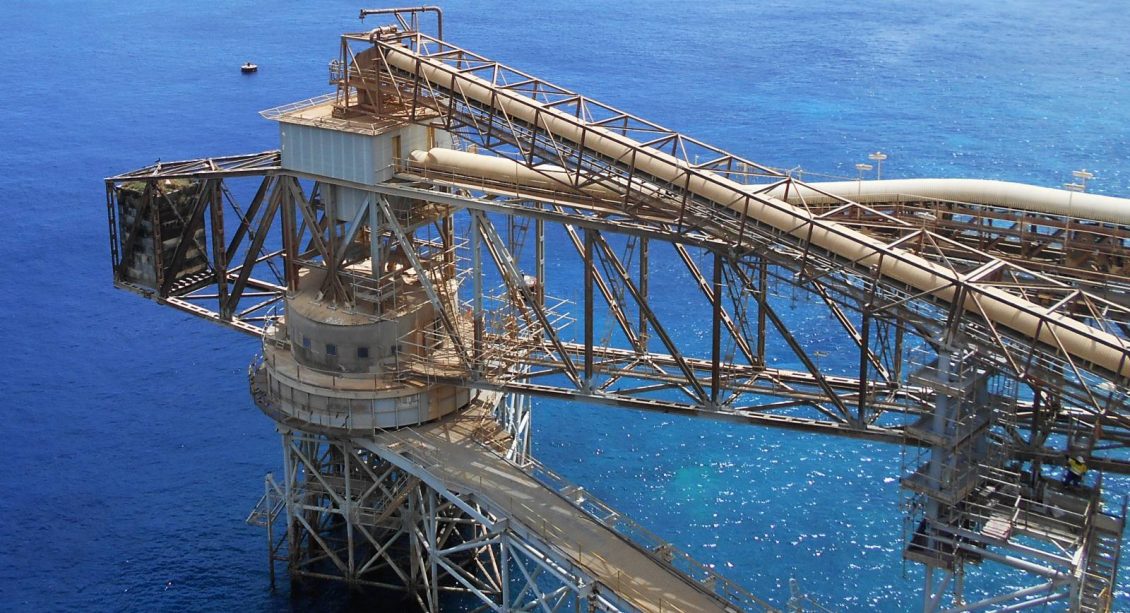 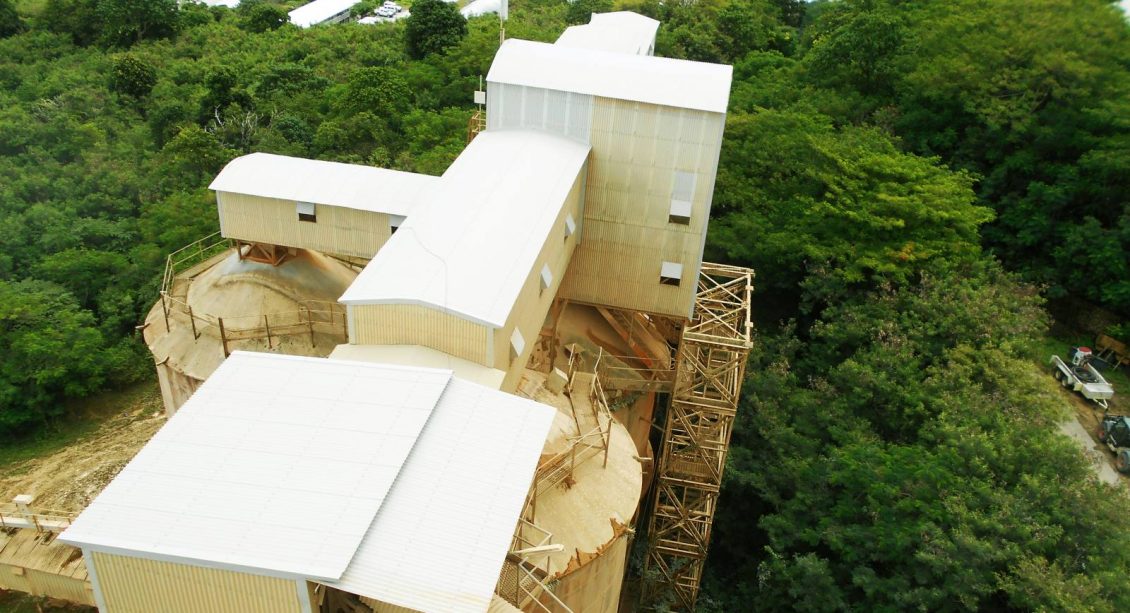 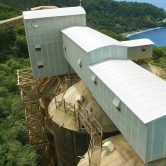 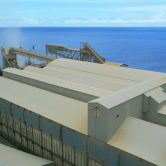 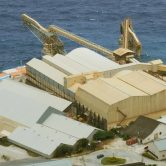 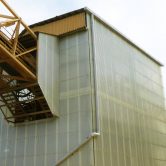 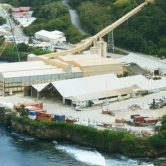 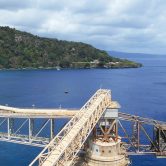 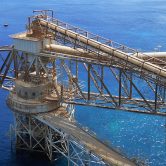 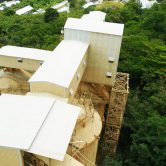 Christmas Island is located in the Indian Ocean 3,400km from Australia with a local population of 2,000 residents. Christmas Island Phosphates mines and exports approximately 650,000t of bulk phosphate rock and 72,000t of bagged phosphate per annum.

After the success of McMahon Services first asbestos removal and remediation of several warehouses and workshops on the mine, Christmas Island Phosphates reengaged McMahon Services to undertake additional works of a similar nature on site.

Many of the structures were situated on ship loading infrastructure over water or on buildings construction on top of silos requiring works to be undertaken at heights of up to 40m. Many roofs were constructed at up to 35° to the horizon. These challenging conditions required stringent safe work method statements including the use of safety harness, cranes and scaffolding with edge protection which progressively followed work fronts. Over a 100t of scaffolding was utilised on the project on a continuous basis.

Mine operations were temporarily shut down in roof remediation work areas as required. Due to the humidity and the heavy and often unpredictable rainfall, all roofing works were completed at the end of each work day. On days of high likelihood of rain works were postponed. Tarpaulin covers were used as an additional measure to keep rain out of mine buildings. These practices ensured that no rain event impacted mine operations at any time.

Project peaked at 14 personnel with an average workforce of 10 delivering the works over an almost continuous three-year period. 98,000 work hours were completed without a single Lost Time Injury, Medical Treatment Injury or environmental incident recorded against the project.

Plant and equipment utilised on the project included two 45ft boom lifts and a 100t crane. All three items were purchased by Christmas Island Phosphates. McMahon Services personnel trained local mine personnel on how to safely operate and maintain each item. The high humidity on the island occasionally affected the electrics on the crane requiring a full-time electrician onsite to ensure all plant and equipment operated at capacity at all times. Works were undertaken on a fly in fly out roster of five weeks on site and one week offsite.

Asbestos containing roofing materials totalled 30,000m² which were wrapped in 200µm plastic in 15 sheet lots and disposed of under asbestos conditions at the local waste receiving station. Replacement roofing materials were procured in Perth with a six-week lead time for delivery. Complicating procurement were the swells in Christmas Island’s harbor which sometimes resulted in ships being unable to berth for up to two weeks until swells calmed. This risk was incorporated into all delivery programs. All works were delivered to program and budget.