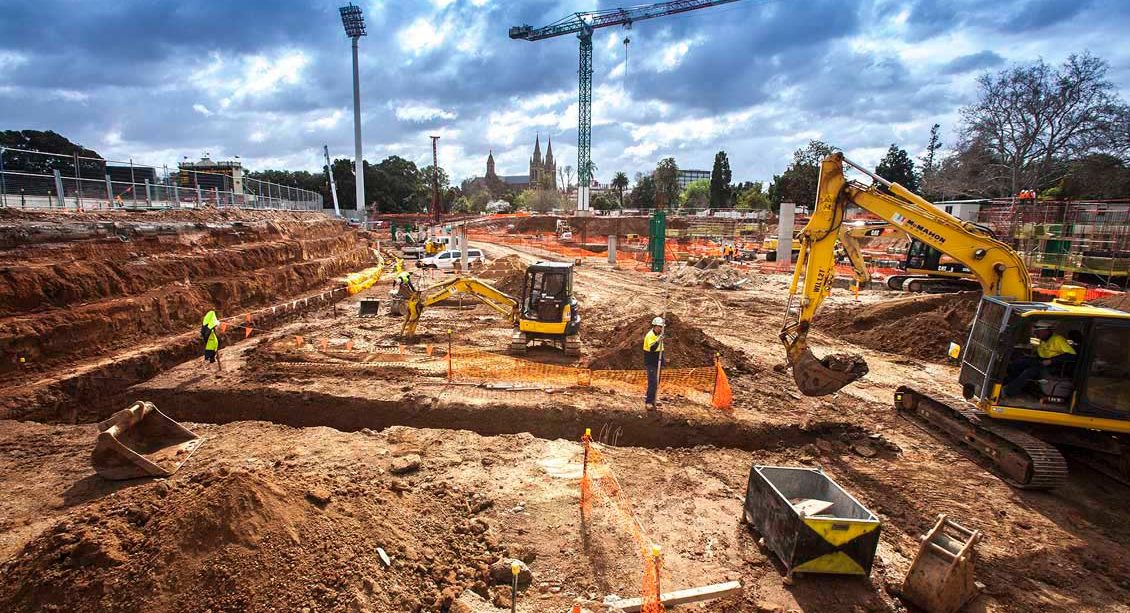 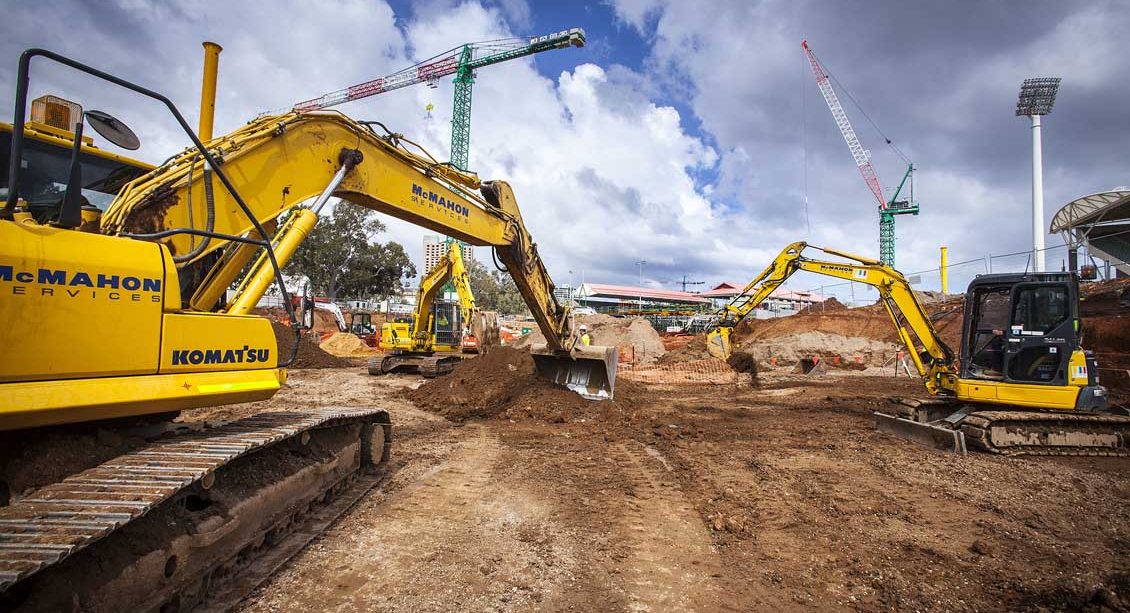 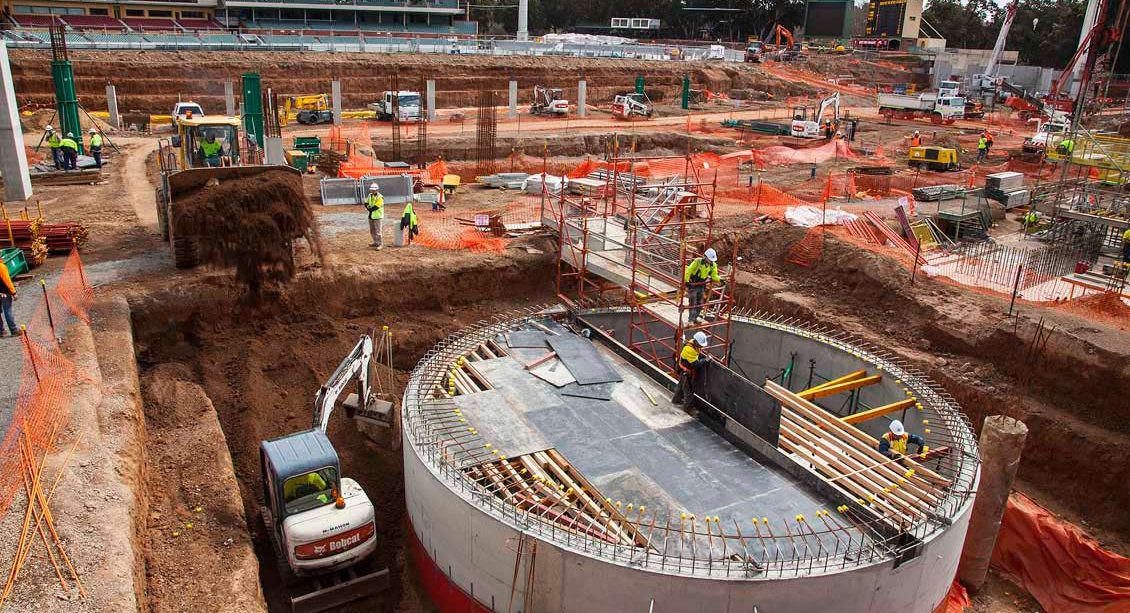 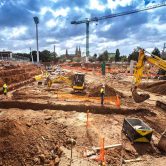 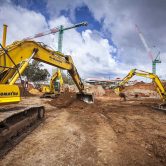 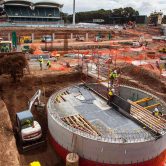 McMahon Services was awarded two separate contracts as part of the redevelopment project. The demolition team arrived on site first, deconstructing the Grandstands to ground level and recovering all salvage items in just 18 days.

A team of 41 personnel, including five workers from Intract Indigenous Contractors – McMahon Services’ Indigenous labour division mobilised to site in June 2012 to complete the civil component.

The substructure works saw the team carry out the excavation of over 250 pile caps, 974 metres of strip footings, 2619 metres of slab beam thickenings and 663 propping pads for a precast retaining wall.

Excavation works also included five core foundations, along with a DAF Tank and two sewer tanks, with the team excavating over 10,500 cubic metres of material.

In preparation for the 250 pile caps, the project team baled-out wet concrete utilising custom-built ‘Torpedos’ – designed and built by McMahon Services specifically for the project. These innovative pieces of equipment allowed for easy access and the speedy removal of the wet concrete through a narrow steel reinforcing cage.

Running simultaneously to the substructure works was the installation of external stormwater infrastructure. The team installed over 1500 metres of pipe, including 90 pits and excavated over 1300 cubic metres of material.

Installation of the new stormwater infrastructure proved to be the key challenge for this project. McMahon Services was required to supply and install an 825mm diameter RCP stormwater drainage system across War Memorial Drive, through the adjacent grassed embankment and into the River Torrens. The system was designed to capture stormwater runoff from the oval and discharge into the river. The proposed stormwater system consisted of 2 RCP concrete pipes with rubber rings including precast concrete junction and grated inlet pits.

However there were several issues, with a disconnect between the design and what was practically possible on-site.  Issues varied from the existing topography on which the works had to be constructed, protection and working around significant trees, traffic and pedestrian management, environmental considerations, existing services located in the ground, and the most problematic – the existing as-constructed River Torrens retaining wall.

McMahon Services worked closely with the client, Adelaide City Council and and designers (Arup Engineering) to develop several methodologies, keeping in mind the key handover condition that the existing condition of both the retaining wall and the works under the water level were to be returned ‘undamaged’ and ‘unaltered’ by the proposed new works.

A suitable and adequate dewatering system / layout had to be considered and adopted. Based on the initial design concept drawings, it was considered that steel sheet piling would be installed on the outside face i.e. river side of the retaining wall, the water pumped out from within the sheet piles, and once dewatered the area inside the sheet piles to be suitably excavated to allow the new works to be installed, with the removal of the sheet piles upon completion. However, this presented several problems.

Demonstrating innovation at its best, McMahon Services then proposed a second dewatering proposal, whereby sheet piling would be installed from the dry side (or embankment side) of the retaining wall. The sheet piles would be returned at 90 degrees on each side for a distance of approximately 2 metres, to achieve a relatively good seal. A suction pump would be used to pump out any residual water entering through the clutches of the steel sheets. This created a dewatering process within the sheet piles, but the team still had the difficult task of breaking through the retaining wall to complete the pipe installation to allow for the discharge of water.

The team then began excavation works ready for the installation of three concrete culverts and a pit. A foundation was then designed to support the culverts and pit. Conscious of the weight and restrictions with lifting equipment, the pit was manufactured in smaller increments. Once installed, the structures were bandaged up and fixed into position using additional concrete. Now it was time to break into the river.

To control the velocity of the water (that would discharge from the oval precinct), McMahon Services had to develop ideas of what to put inside the culvert. A thin steel plate was cut to the profile of the culvert and extended out over the interface between the sheetpiles and reno mattress, which was then bridged so the water could run over the existing reno mattress and avoid any “wash” or erosion of the embankment and surrounding area. A metal lid was then placed over to finish the challenging, high risk works.

To meet strict environmental requirements, the team installed a ‘silt sock boom curtain’ to contain any chemical spills into the Torrens and placed absorbent pads on the water surface.

A pump with filters was set-up to ensure clean return of water pumped back into the River from the excavation activities.  Turbidity testing was undertaken to ensure the water quality released back into the Torrens met the requirements of the South Australian EPA Policy.

Waterfilled barriers lined with geofabric were also used to retain excavated material, both contaminated and clean stockpiles. A silt fence was installed at the bottom of the embankment to collect any soil or fluid that escaped during the excavation process. Geofabric and mulch was also placed to tree protection zones.

An Emergency Procedure was in place as there was a high risk of drowning working on the river front. A rescue boat and spill kit was on standby, and all personnel working on the water front were equipped with harnesses and life jackets.

The site also held Aboriginal Heritage Significance, which was captured in our Environmental Management planning. Personnel were inducted into Aboriginal Heritage Awareness training and then supervised by an archaeologist, overseeing all excavation activities and ensuring the protection of any Aboriginal artefacts found.

This project went on to win the SA CCF Earth Award for Category 2 in 2013 – the third consecutive win for our Civil Division.