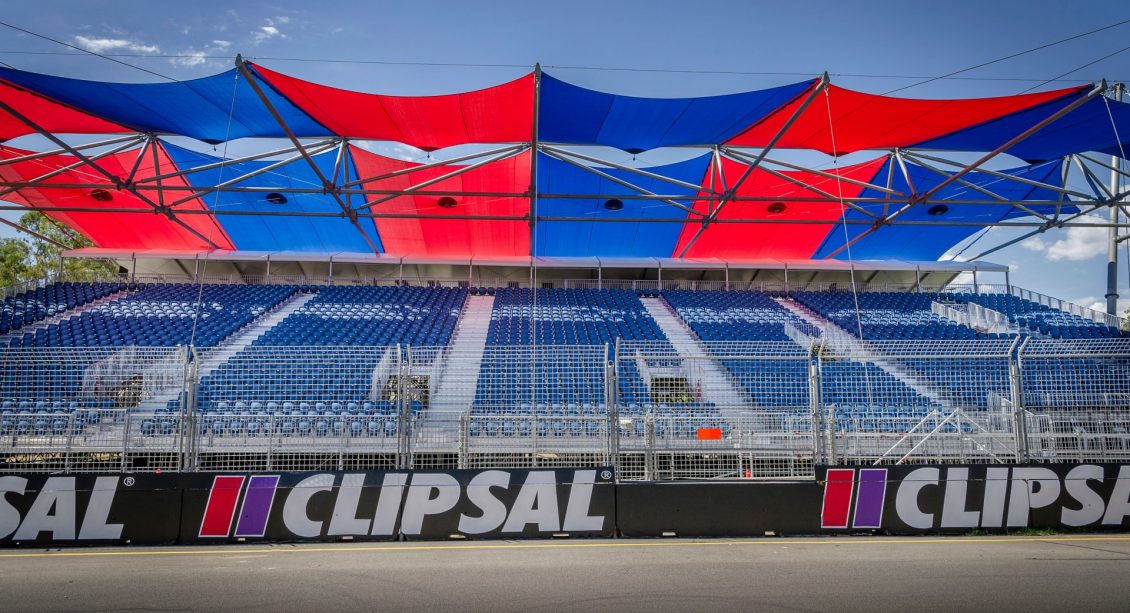 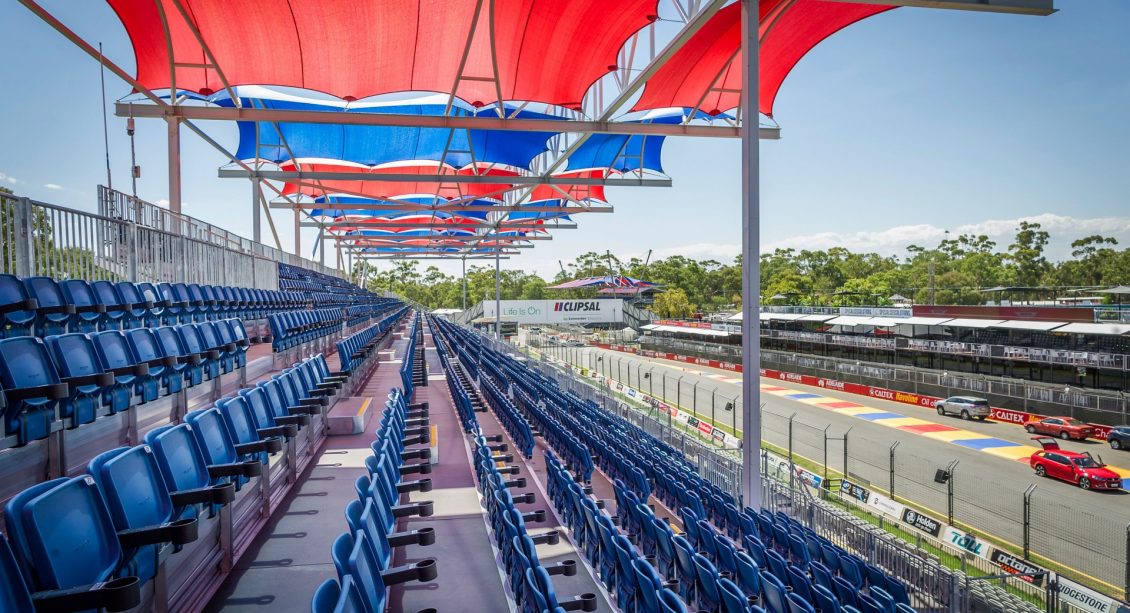 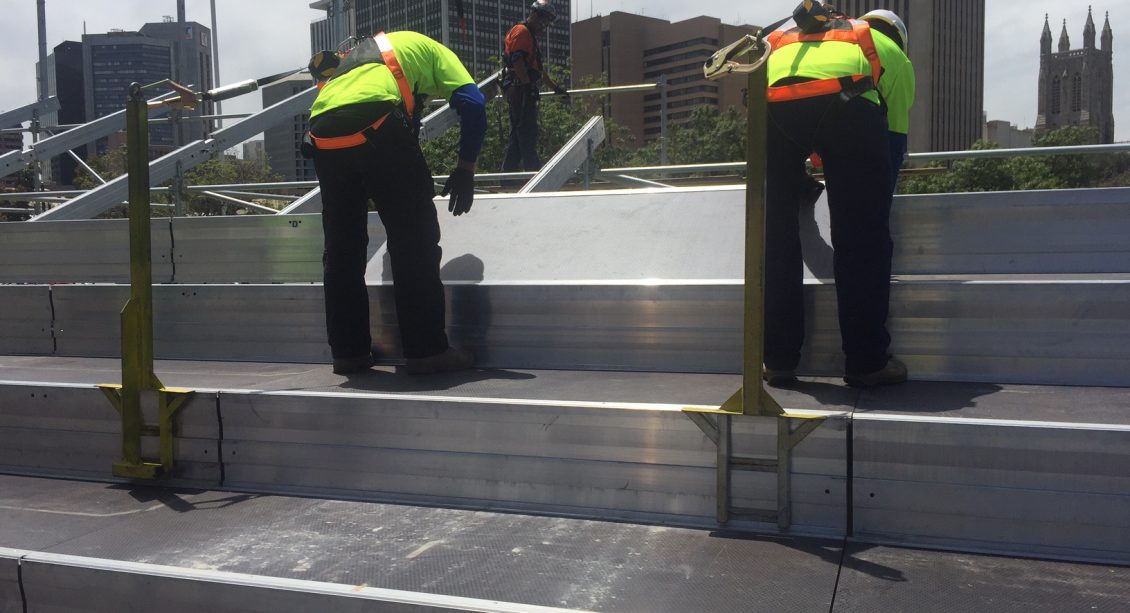 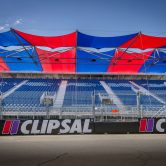 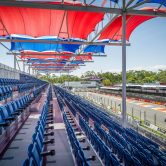 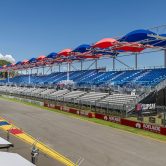 The Adelaide 500 (previously known as Clipsal 500), is an iconic motor racing event for Supercars, held annually on the streets in the East end of Adelaide.

For the 2017 event, McMahon Services were engaged by the South Australian Tourism Commission to undertake the supply, build, dismantle, demobilisation, design and certification of grandstands and corporate platforms, for the event held from 2nd to 5th March 2017.

Due to the previous contractors being unable to service the event, McMahon Services Events were successful in acquiring the contract, allowing the team to secure the event for the next five years.

The contract was separated into two main components – the temporary grandstand and the corporate platform assembly and dismantling. McMahon Services Events worked extremely close with the Engineering Project Manager iEDM and the South Australian Tourism Commission to ensure all scope elements were delivered on time and to specification for the project.

The team were contracted to build and dismantle four temporary grandstands with 14,247 seats:

The team arrived on site three months prior to event commencement, and were provided with a compound area which was used for deliveries, for storing plant and equipment and also the site office.

Scaffolding was delivered to each respective site, with the delivery team building one grandstand at a time, perfecting each build before the next grandstand build would commence.

The team were able to build one half of the Braham Straight, which was situated on and around Dequetteville Terrace whilst keeping one lane open to traffic, which then required the whole road closed closer to the date and on weekends leading up to the event.

Pirie Street Grandstand was built in the last week leading up to the event due to the large amount of road closures required to construct it, and keeping it erected until event commencement.

The extensive traffic management throughout the project was managed by engineering contractor iEDM. All teams liaised on a regular basis, informing one another of project schedules and time frames.

During the temporary grandstands construction, the McMahon Services Events team also completed the build of the 12 corporate platforms under a separate contract, all varying in sizes from 100m² to 200m² and were spread around the entire track.

Working on scaffolding projects where there is the requirement of working over a live edge, McMahon Services Events designed a temporary harness fixed point that connects the harness to a baton that is connected to the riser of the grandstand. The personnel attach their harness to the “Fall Arrest Temporary Connection Baton” automatically providing sufficient stability.

The Fall Arrest Temporary Connection Baton base section is securely locked into the bottom and top rebates of the riser extrusion, providing sufficient support for the harness.

This project held a tight schedule with specific delivery timeframes for each grandstand. The project was executed by adopting a staged approach, with all elements needing to fall into place before the next phase could begin. The team allowed approximately three days to build each grandstand, and approximately one day to dismantle them.

As soon as the event had ended the team immediately began dismantling and demobilising in order to keep to the project schedule. The grandstands that were on heavily traffic heavy roads were dismantled first in order to keep traffic disruption to a minimum.

The event was in a very high public area. In order to keep the work site secure and ensure no members of the public were able to access prohibited areas, there was a constant spotter on the main entry gate as well as security guards patrolling the areas.

The final week leading up to the event, all surrounding and affected roads were shutdown, making it easier for all project teams and trades to be able to coordinate the remaining works for completion. There were many elements to the project that weren’t able to be completed until the last week, due to several factors, but the main factor being road closures. The event organisers intention was to leave the major road closures until as close to the event as possible.

Throughout the build and dismantle there was a great deal of coordination with other contractors and trades. On the site at all times there were personnel installing road barriers, fencing, removing curbing and roundabout infrastructure, as well as removing traffic lights and signage. The main contractors held weekly meetings, updating all involved the progress of their tasks, informing the other teams of upcoming road closures and delivery schedules, this ensured open communication between all involved, an integral part of the smooth running of the overall project.

With the building of the scaffolding being undertaken in the peak of summer, it was necessary for the project team to manage fatigue and coordinate works around the extreme weather conditions. Heat proof gloves were an essential part of the personal protective equipment requirements, due to the scaffolding being stored in the weather, it was too hot to handle without gloves.

The team had a hot weather policy – with works ceasing when the temperature reached beyond 38oC.

The majority of the work site was situated in parklands. McMahon Services Events were required to maintain the grass to the Council standards. The team were required to place chocks under the corners of all containers, buildings and infrastructure, and it was necessary to ensure the infrastructure was elevated, minimising impact on the natural surface.

The team were required to utilise ply boarding for plant access to facilitate construction as required along the track verges to ensure the verge condition remained pristine for event presentation.

The event was delivered one day ahead of schedule prior to event commencement on the 3rd March 2017, with the dismantle and demobilisation completed an impressive two weeks ahead of past contractors.

70% of this event was self-delivered.

This project utilised the use of Elevated Work Platforms for the erection of the high grandstands, totalling 10m, minimising working at heights and manual handling. Once the decks were built they used telehandlers to place stillage’s of handrails, additional floor decks and seats to convenient locations to the grandstands, reducing manual and double handling.